Brian just entered the museum. Looking at the "You are here" map, he sees that his favorite exhibit, "Dinosaurs in Motion!" has been moved to the third floor, and is in the fourth room on the right.

Brian knows the museum well, so he knows the entrance is the first room on the left on the first floor, and is already familiar with the museum layout of 8 rooms on each side of the main hall on each floor, with the stairs at the front of the building.

How could the location of the dinosaur exhibit be described in 3-dimensional coordinates? What is the displacement of the dinosaur room from his position at the front entrance?

The rectangular (or Cartesian) coordinate system is used to describe a plane divided into four quadrants, as shown below left. (Note, the colored squares are used to help you visualize the space, remember that the coordinate planes actually extend outward toward infinity.)

The Cartesian coordinate system use to describe three-dimensional space consists of an origin and six open axes, +z and –z are perpendicular to the x-y plane. These axes define three planes which divide the space into eight parts knowns as octants as shown above right. Think of these planes as cutting space three ways: left to right, top to bottom, and front to back.

Earlier, you were asked a question about Brian, who wants to describe the location of the dinosaur exhibit in 3-dimensions.

Brian knows the museum well, so he knows the entrance is the first room on the left on the first floor, and is already familiar with the museum layout of 8 rooms on each side of the main hall on each floor, with the stairs at the front of the building. How could the location of the dinosaur exhibit be described in 3-dimensional coordinates? What is the displacement of the dinosaur room from his position at the front entrance?

A coordinate system can be assumed to use any units you wish, in this case the location information is given in units of "rooms" and "floors". Let the x axis represent the horizontal left and right-hand sides of the main halls, y can be the vertical axis, and z can be the front-back axis of rooms down each hall.

Let Brian's starting position at the entrance represent (0,0,0) in three dimensional rectangular coordinates. "Dinosaurs in Motion!" is on the third floor, and is in the fourth room on the right.

(2,3,4) would represent the dinosaur exhibit room.

Since we were clever, and oriented our coordinate system on the entrance, the vector displacement is the same as the room's location: ⟨2rooms,3floors,4rooms⟩.

Darnell was driving home from a football game in a nearby town when he swerved to avoid a deer which had run onto the road. Fortunately for Darnell, he was able to avoid hitting the deer. Unfortunately, his car ended up in the ditch beside the road. When he was unable to remove the car from the ditch by himself, he walked across a nearby field to the Tucker family farm to ask for help. Darnell later looked at a topographical map and identified his trip across the field. He traveled 300 yards south and 750 yards west from where he left his car. The map showed that he also walked uphill from an altitude of 800 feet to an altitude of 850 feet above sea level. If we treat the location of Darnell’s car as the origin of coordinates, what the position vector of the Tucker farm?

Define a coordinate system where x = E, y = N, and z = up. Since Darnell walked south and west from the car, the x and y coordinates of the farm are both negative. If we measure all of the distances in feet (1 yard = 3 feet), the farm’s position vector can be written as

Note in this example that Darnell’s walking distance was given in yards, while the elevation change was given in feet. You need to watch out for these small changes when you are solving real-life problems.

Zeke is enjoying an afternoon at the local skate-park. The diagram below shows his starting position and his ending position at the highest point on the new hill.

Another possible origin of coordinates is at the point marked O in the diagram below. In this case his original position is given by \(\ \overrightarrow{r_{i}}=\langle-6.1 m, 0 m, 0 m\rangle\) and his final position is given by \(\ \overrightarrow{r_{f}}=\langle 0 m, 2.3 m, 0 m\rangle\). Zeke’s displacement is the difference between these two vectors,

An architecture student designs a spiral staircase, a model of which is shown below. The staircase winds its way around a cylinder of radius 3.5 m and height 11 m. The staircase makes 1 7/8 turns progressing counter-clockwise from its beginning at point A to its end point at B. Using an origin of coordinates at the bottom center of the staircase, determine the position vectors of points A and B. Then find the displacement vector between the two points. 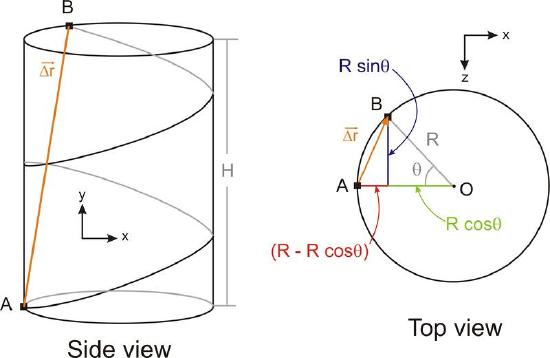 Point B is located 11m above point A and 7/8 of one turn counter-clockwise is equal to 1/8 of one turn clockwise, so θ = 45o. We can also use the geometry of the system to determine the x and z coordinates of point B:

The displacement vector between these two points is the vector which obeys the equation:

To find the midpoint between two points, determine the average of the two positions.

I, j and k are unit vectors respectively in the positive direction of the x, y, and z axes. I, j and k are unit vectors respectively in the negative direction of the x, y, and z axes. 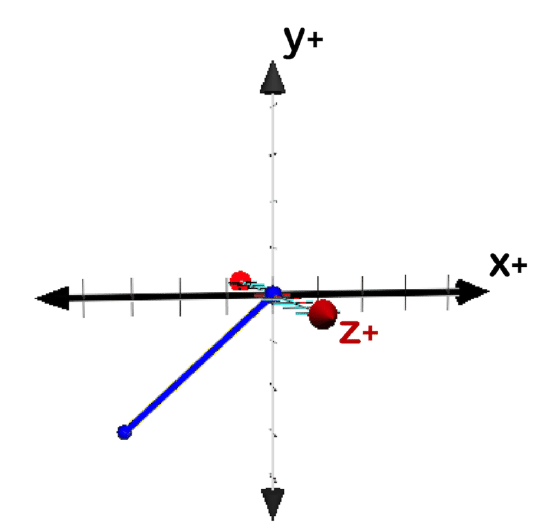 Given: initial and final position vectors the coordinate system. Identify the displacement vector or midpoint from the initial to the final position.

Identify the midpoint between points A and B.

To see the Review answers, open this PDF file and look for section 5.3.