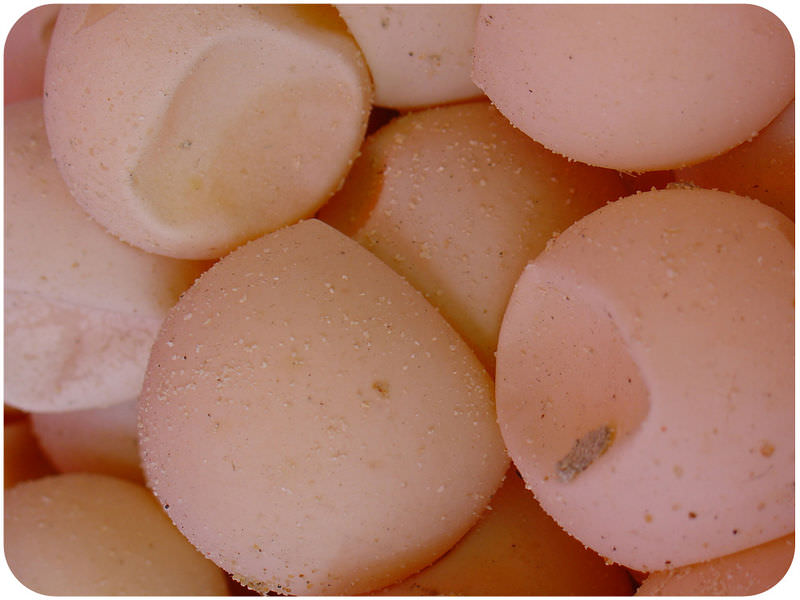 This picture might look like a bunch of ping-pong balls, but actually it's a picture of turtle eggs. Notice the soft, leathery shell that is typical of reptile eggs.

Turtles are reptiles in the order Testudines. If you have seen turtles before, what is the most noticeable thing about them? Their shells. Most turtle bodies are covered by a special shell developed from their ribs. Their shells can be bony or cartilaginous, made from a more flexible supportive tissue. About 300 species are alive today, and some are highly endangered. Like other reptiles, turtles cannot regulate their body temperature, except with behavioral means, such as burrowing underground. The major difference between turtles and tortoises is that the land dwelling ones are called tortoises and water dwelling are called turtles.

Turtles are broken down into two groups, based on how they bring their neck back into their shell:

Although many turtles spend large amounts of their lives underwater, they can also spend much of their lives on dry land and breathe air. Turtles cannot breathe in water, but can hold their breath for long periods of time. Turtles must surface at regular intervals to refill their lungs.

The position of a turtle's eyes can give a clue to their natural habitat. Most turtles that spend most of their lives on land have their eyes looking down at objects in front of them. Some aquatic turtles, such as snapping turtles and soft-shelled turtles, have eyes closer to the top of the head. These species of turtles can hide from predators in shallow water, where they lie entirely submerged in water except for their eyes and nostrils.

Sea turtles (Figure below) have glands near their eyes that produce salty tears, which remove excess salt taken in from the water they drink.

Turtles have exceptional night vision due to the unusually large number of cells that sense light in their eyes. This allows them to be active at any time of the day. Turtles also have color vision.

Turtles don’t lay eggs underwater. Turtles lay slightly soft and leathery eggs, like other reptiles. The eggs of the largest species are spherical, while the eggs of the rest are longer in shape. After internal fertilization, a female is ready to lay her eggs, she places a large numbers of eggs in holes dug into mud or sand. They are then covered and left to grow and develop by themselves. When the turtles hatch, they squirm their way to the surface and head toward the water. They need to get to the water as fast as possible before they are fed upon by animals such as seabirds, crabs, and raccoons.

How do Turtles Eat?

Turtles may appear slow and harmless when they are out of the water, but in the water is another story. Turtles can be either herbivores or carnivores, with most sea turtles carnivorous. Turtles have a rigid beak and use their jaws to cut and chew food. Instead of teeth, the upper and lower jaws of the turtle are covered by horny ridges. Carnivorous, or animal-eating turtles usually have knife-sharp ridges for slicing through their prey. But as the turtle is not a very fast animal, and it cannot quickly turn its head to snap at prey, it does have some limitations. Sea turtles typically feed on jellyfish, sponges and other soft-bodied organisms. Some species of sea turtle with stronger jaws eat shellfish, while other species, such as the green sea turtle, do not eat any meat at all. Herbivorous turtles have serrated ridges that help them cut through tough plants.

How Big Are Turtles?

The largest turtle is the great leatherback sea turtle (Figure below), which can have a shell length of seven feet and can weigh more than 2,000 pounds. The only surviving giant tortoises are on the Seychelles and Galápagos Islands and can grow to over four feet in length and weigh about 670 pounds (Figure below). The smallest turtle is the speckled padloper tortoise of South Africa, measuring no more than three inches in length, and weighing about five ounces. The largest ever turtle was the know extinct Archelon genus, a Late Cretaceous sea turtle known to have been up to 15 ft long, and 16 ft wide from flipper to flipper. The closest living relative of this genus is the leatherback sea turtle.

It was the giant Galápagos tortoises that Charles Darwin studied during his voyage on the Beagle, providing significant evidence that he used to support his theory of evolution.