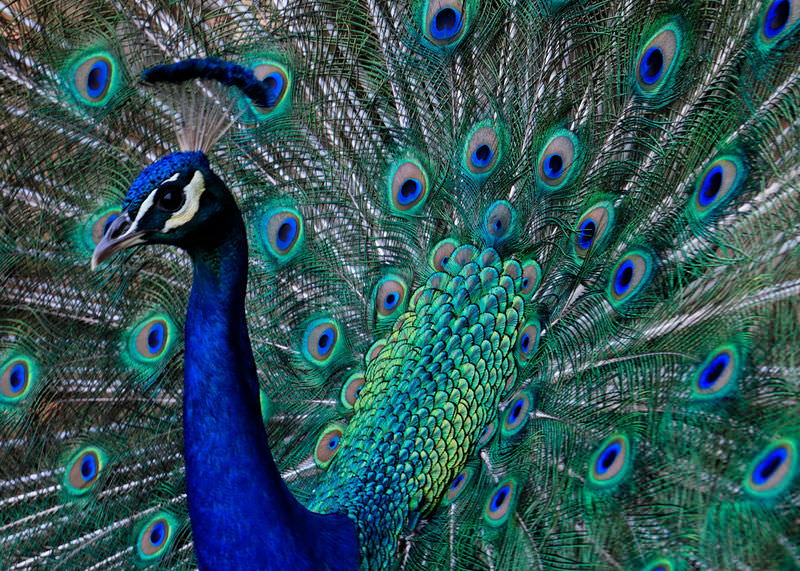 Why do peacocks have huge, bright feathers?

Male peacocks use their colorful feathers to attract females. Females tend to mate with the males with the largest, brightest feathers. A large, bright tail indicates the male is healthy and likely to produce healthy offspring. You've probably also heard birds "sing." Eagles do aerial acrobatics and tumbling. These are other ways to attract mates.

How do birds reproduce? We know that chickens lay eggs. But how do they do that?

It all starts with behavior aimed at attracting a mate. In birds, this will involve a type of display, usually performed by the male. Some displays are very elaborate and may include dancing, aerial flights, or wing or tail drumming. Most male birds also sing a type of song to attract females. If they are successful at attracting a female, it will lead to breeding.

Birds reproduce by internal fertilization, during which the egg is fertilized inside the female. Like reptiles, birds have cloaca, or a single exit and entrance for sperm, eggs, and waste. The male brings his sperm to the female cloaca. The sperm fertilizes the egg. Then the hard-shelled egg develops within the female. The hard-shelled eggs have a fluid-filled amnion, a thin membrane forming a closed sac around the embryo. Eggs are usually laid in a nest.

Why do you think eggs come in so many different colors? Birds that make nests in the open have camouflaged eggs (Figure below). This gives the eggs protection against predation. Some species, like ground-nesting nightjars, have pale eggs, but the birds camouflage the eggs with their feathers.

To protect their young, different species of birds make different nests. Birds of all types, from hummingbirds to ostriches, make nests. Many can be elaborate, shaped like cups, domes, plates, mounds, or burrows. However, some birds, like the common guillemot, do not use nests. Instead, they lay their eggs on bare cliffs. Emperor penguins do not have a nest at all; they sit on eggs to keep them warm before they hatch, a process called incubation.

How else might a bird help protect its young from predators? Most species locate their nests in areas that are hidden, in order to avoid predators. Large birds, or those that nest in groups, may build nests in the open, since they are more capable of defending their young.

In birds, 90% to 95% of species are monogamous, meaning the male and female remain together for breeding for a few years or until one mate dies. Birds of all types, from parrots to eagles and falcons, are monogamous. Usually, the parents take turns incubating the eggs. Birds usually incubate their eggs after the last one has been laid. In polygamous species, where there is more than one mate, one parent does all of the incubating. The wild turkey is an example of a polygamous bird.

The length and type of parental care varies widely amongst different species of birds. At one extreme, in a group of birds called the magapodes (which are chicken-like birds), parental care ends at hatching. In this case, the newly-hatched chick digs itself out of the nest mound without parental help and can take care of itself right away. These birds are called precocial. Other precocial birds include the domestic chicken and many species of ducks and geese. At the other extreme, many seabirds care for their young for extended periods of time. For example, the chicks of the Great Frigatebird receive intensive parental care for six months, or until they are ready to fly, and then take an additional 14 months of being fed by the parents (Figure below). These birds are the opposite of precocial birds and are called altricial.

In most animals, male parental care is rare. But it is very common in birds. Often both parents share tasks such as defense of territory and nest site, incubation, and the feeding of chicks. Since birds often take great care of their young, some birds have evolved a behavior called brood parasitism. This happens when a bird leaves her eggs in another bird’s nest. The host bird often accepts and raises the parasite bird's eggs.