In 1602, the astronomer Johannes Kepler was working on a problem for his boss Tycho Brahe. He was continuing a centuries-old study trying to devise a formula that could calculate the orbits of the planets, specifically Mars in this case. He worked for years on the problem with the most advanced technology of the time, but was never satisfied with the results as they were never truly accurate or reliable.

To simplify his calculations, he hit upon the concept that a planet sweeps out equal areas of space (in a pie-slice shaped figure with the sun at the tip) in equal amounts of time, despite differences in the distance of the planet from the sun.

For the next three years he attempted to design the perfect equation to describe an orbit which would fit this and other observations he was using.

Finally, in 1605, he realized that he had the answer. His realization/discovery would firmly place him as one of the most famous scientists of all time.

What did he realize?

Ellipses Not Centered at the Origin

Earlier, you were asked a question about the problem that astronomer Johannes Kepler was working on for his boss, Tycho Brahe.

Kepler's realization was that, even though he had deliberately avoided them for a very long time because they were so simple, ellipses were the perfect shape to make all of his calculations come together.

When a planet orbits the sun (or when any object orbits any other), it takes an elliptical path and the sun lies at one of the two foci of the ellipse. Kepler's laws regarding planetary motion are accurate enough to produce modern computations which are still used to predict the motion of artificial satellites today. This produces a graph that is shifted horizontally by \(\ h\) and vertically by \(\ k\).

Now, we “complete the square” by adding the appropriate terms to the \(\ x\) expressions and the \(\ y\) expressions to make a perfect square.

Now we factor and divide by the coefficients to get:

And there we have it. Once it’s in this form, we see this is an ellipse is centered around the point (-1,2), it has a horizontal major axis of length 3 and a vertical minor axis of length 2, and from this we can make a sketch of the ellipse: The National Statuary Hall in the United States Capital Building is an example of an ellipse-shaped room, sometimes called an “echo room”, which provide an interesting application to a property of ellipses. If a person whispers very quietly at one of the foci, the sound echoes in a way such that a person at the other focus can often hear them very clearly. Rumor has it that John Quincy Adams took advantage of this property to eavesdrop on conversations in this room.

How do Echo Rooms work? What does the elliptical shape of the room have to do with it?

The property of ellipses that makes echo rooms work is called the “optical property.” So why echoes, if this is an optical property? Well, light rays and sound waves bounce around in similar ways. In particular, they both bounce off walls at equal angles. In the diagram below, \(\ α=β\).

For a curved wall, they bounce at equal angles to the tangent line at that point: 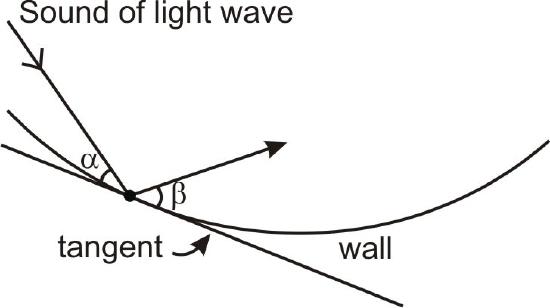 So the “optical property” of ellipses is that lines between a point on the ellipse and the two foci form equal angles to the tangent at that point, or in other words, whispers coming from one foci bounce directly to the other foci. In the diagram below, for each \(\ Q\) on the ellipse, \(\ \angle \alpha \cong \angle \beta\).

Though planets take an elliptical path around the sun, these ellipses often have a very low eccentricity, meaning they are close to being circles. The diagram above exaggerates the elliptical shape of a planet’s orbit. The Earth’s orbit has an eccentricity of 0.0167. Its minimum distance from the sun is 146 million km. What is its maximum distance from the sun? If the sun’s diameter is 1.4 million kilometers, do both foci of the Earth’s orbit lie within the sun?

What is the sum of the distances to the foci of the points on a vertically-oriented ellipse?

After completing the square, we have the sum of positive numbers equaling a negative number. This is an impossibility, so the equation has no solutions.

After completing the square, the \(\ x\) term and the \(\ y\) term are opposite signs. If you plot some points you will see that the graph has two disconnected sections. This class of conic sections will be discussed in the lesson on hyperbolas.

To see the Review answers, open this PDF file and look for section 6.2.