Can you tell which type of rock these are?

If you look up close, you would be able to see grains of sand. From this distance, you can see different layers from where the sand was laid down. This rock is sandstone. The sand grains are cemented together to make sandstone. Sandstone is a common type of sedimentary rock.

Clastic sedimentary rocks are grouped by the size of the sediment they contain. Conglomerate and breccia are made of individual stones that have been cemented together. In conglomerate, the stones are rounded. In breccia, the stones are angular. Sandstone is made of sand-sized particles. Siltstone is made of smaller particles. Silt is smaller than sand but larger than clay. Shale has the smallest grain size. Shale is made mostly of clay-sized particles and hardened mud.

Sedimentary rocks formed by the crystallization of chemical precipitates are called chemical sedimentary rocks. Dissolved ions in fluids precipitate out of the fluid and settle out, just like the halite pictured below (Figure below). 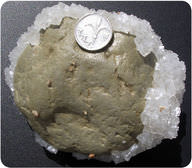 The evaporite, halite, on a cobble from the Dead Sea, Israel.

The bodies of organisms can make a sedimentary rock. Plant bodies are lithified to become coal. When shells are cemented together they make a type of limestone. So limestone can be considered chemical or organic.

Listed below are some common types of sedimentary rocks (Table below).