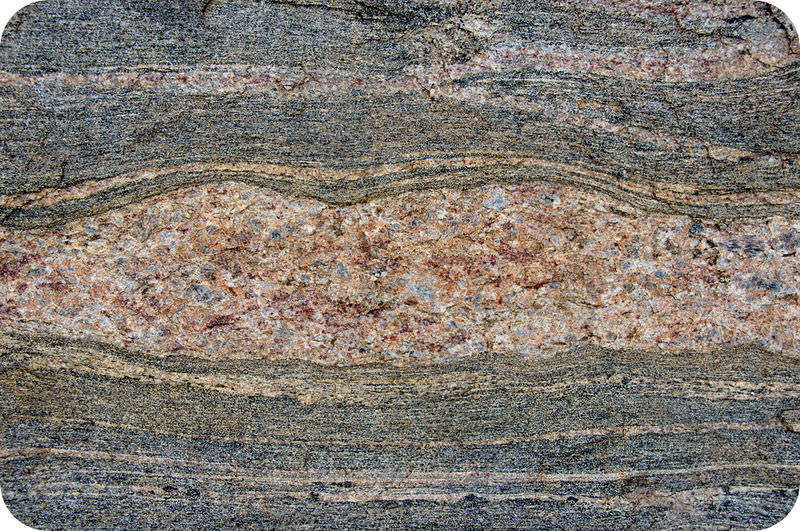 What is the history of this rock?

The rock in this photo is a banded gneiss. The bands are made of different minerals. The light bands are more felsic, and the dark bands are more mafic. The minerals separated due to heat and pressure. The waviness of the bands also shows how the rock was hot enough to alter. It was not hot enough to melt all the way.

During metamorphism, a rock may change chemically. Ions move in or out of a mineral. This creates a different mineral. The new minerals that form during metamorphism are more stable in the new environment. Extreme pressure may lead to physical changes. If pressure is exerted on the rock from one direction, the rock forms layers. This is foliation. If pressure is exerted from all directions, the rock usually does not show foliation.

There are two main types of metamorphism: contact and regional.

Contact metamorphism results when magma contacts a rock. The rock changes because of the magma's extreme heat (Figure below).

(A) Hornfels is a rock that is created by contact metamorphism. (B) Hornfels is so hard that it can create peaks like the Matterhorn in the Alps.

Regional metamorphism occurs over a wide area. Great masses of rock are exposed to pressure from rock and sediment layers on top of it. The rock may also be compressed by other geological processes. If the rock is buried deeply, it may experience high temperatures.

Metamorphism does not cause a rock to melt completely. It only causes the minerals to change by heat or pressure. If the rock melts completely, it will cool to become an igneous rock.

Hornfels is a rock with alternating bands of dark and light crystals. Hornfels is a good example of how minerals rearrange themselves during metamorphism (Figure above). The minerals in hornfels separate by density. The result is that the rock becomes banded. Gneiss forms by regional metamorphism from extremely high temperature and pressure.