What do you have to do to get water?

Most Americans have plenty of fresh, clean water, but many people around the world do not. In fact, water scarcity is the world’s most serious resource problem. How can that be? Water is almost everywhere, but much of it is unusable. What is usable is not always where it is needed.

Where Is All The Water?

This glacier in Alaska stores a lot of frozen freshwater.

Rainfall varies around the globe. About 40% of the world's landmass gets very little rain. About the same percentage of the world’s people don’t have enough water. You can compare global rainfall with the worldwide freshwater supply at the two URLs below. Drier climates generally have less water for people to use. In some places, people may have less water available to them for an entire year than many Americans use in a single day! How much water is there where you live?

Wealth and the Water Supply

Richer nations can drill deep wells, build large dams, or supply people with water in other ways. In these countries, just about everyone has access to clean running water in their homes, and water is cheap and easy to get. It’s no surprise that people in these countries use the most water. In poorer nations, there is little money to develop water supplies. Therefore, people get their water where they can.

Water shortages are common in much of the world. People are most likely to run short of water during droughts. A drought is a period of unusually low rainfall. Human actions have increased how often droughts occur. One way people exacerbate droughts is by cutting down trees. Trees add a lot of water vapor to the air. With fewer trees, the air is drier and droughts are more common.

We already use six times as much water today as we did a hundred years ago. As the number of people rises, our need for water will grow. By the year 2025, only half the world’s people will have enough clean water. Water is such a vital resource that serious water shortages may cause other problems.

Figure below shows the global water situation in the 2030s with water stress and water scarcity on the map. 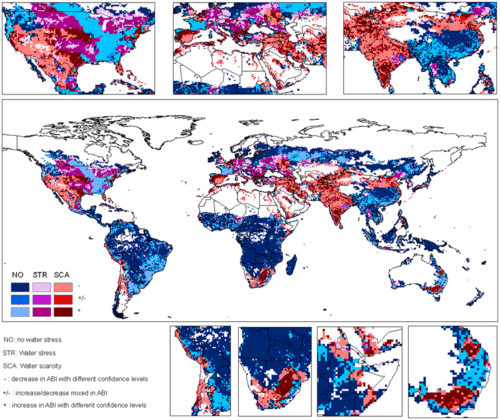 Blues indicate no predicted water stress; pinks and lavenders predict water stress, and salmon to brown indicates water scarcity (variations of those colors indicate the amount of irrigation that will be done to produce crops).