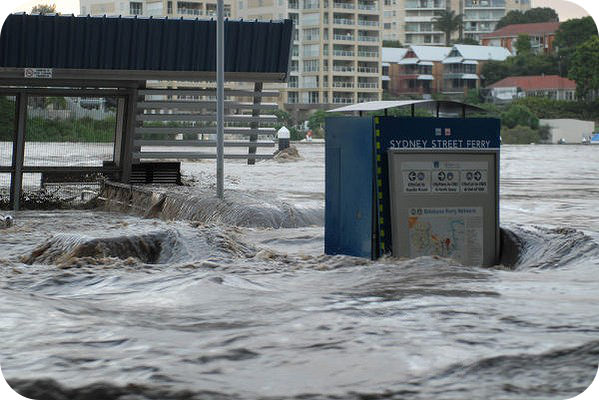 Is the water cycle perfect?

A flood occurs when so much water enters a stream or river that it overflows its banks. Flood waters from a river are pictured below (Figure below). 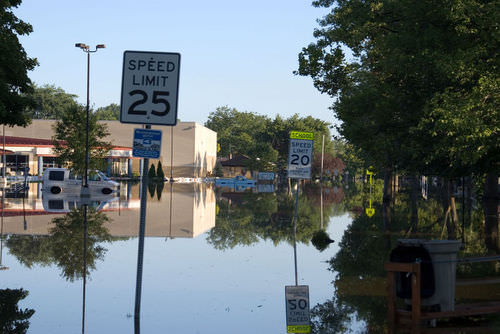 Floods are a natural part of the water cycle, but they can cause a lot of damage. Farms and homes may be lost, and people may die. In 1939, millions of people died in a flood in China. Although freshwater is needed to grow crops and just to live, too much freshwater in the same place at once can be deadly.

Floods may occur when deep snow melts quickly in the spring. More often, floods are due to heavy rainfall. Floods happen when rain falls more quickly than water can be absorbed into the ground or carried away by rivers or streams.

Extremely heavy rains across the Midwestern U.S. in April 2011 led to flooding of the rivers in the Mississippi River basin in May 2011 (Figure below and Figure below). 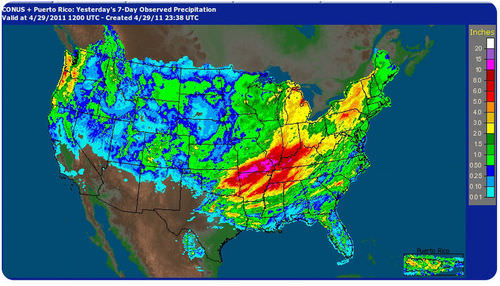 This map shows the accumulated rainfall across the U.S. in the days from April 22 to April 29, 2011.

Record flow in the Ohio and Mississippi Rivers has to go somewhere. Normal spring river levels are shown in 2010. The flooded region in the image from May 3, 2011 is the New Madrid Floodway, where overflow water is meant to go. 2011 is the first time since 1927 that this floodway was used.

Heavily vegetated lands are less likely to experience flooding. Plants slow down water as it runs over the land, giving it time to enter the ground. If the ground is too wet to absorb more water, plants still slow the water’s passage. Slower water keeps all the water from entering the stream at once. Wetlands play a key role in minimizing the impacts of floods. Wetlands act as a buffer between land and high water levels. Flooding is often more severe in areas that have been recently logged.

People protect areas that might flood with dams. In dire situations, they use sandbags (Figure below). Dams are usually very effective, but high water levels sometimes cause a dam to break. In that case, flooding can be catastrophic. Flood waters can also overflow a dam. People may line a river bank with levees to protect against floods. These are high walls that keep the stream within its banks during floods. Flood protection in one location sometimes causes problems elsewhere. For example, a levee in one location may just force the high water upstream or downstream. This will lead to flooding in a different location. Sometimes water gets so high that the river must be allowed to flood. 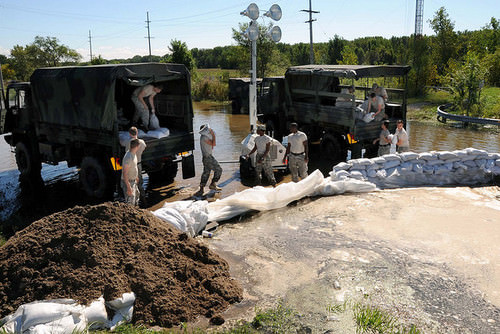 Sandbags are put out to try to keep floodwaters from overtaking a town. 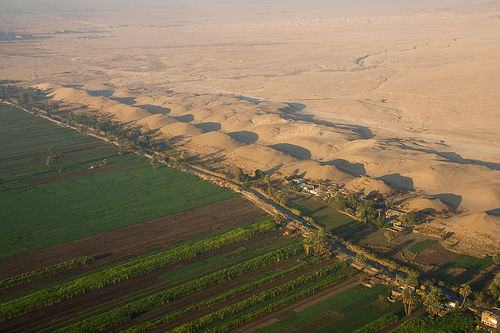 Within the floodplain of the Nile, soils are fertile enough for productive agriculture. Beyond this, infertile desert soils prevent viable farming.

Amazingly, floods can be good. Flood waters carry nutrients that are deposited on the floodplain. So floodplains are good places for farming. In the past, the Nile River (Figure above) in Egypt flooded each year. The flood waters brought much-needed nutrients in to farms. In the 1960s, Egypt built the Aswan Dam to protects crop and settlements from the floods. However, after the dam was built, farmers began to need fertilizers to feed their crops.