Yes! This is the Hubbard Glacier in Alaska. As the glacier meets the relatively warm seawater, it calves. Pieces of the glacier break off and fall into the water. These icebergs may be as large as a ten-story building.

Where Are The Glaciers?

Nearly all glacial ice is in the polar regions. The largest ice sheets are in Antarctica and Greenland. The remaining 1% of Earth's ice is found elsewhere, like in the mountains, for example. At higher altitudes, temperatures are colder. Snow is more likely to fall and not melt. Except Australia, every continent has glaciers in the high mountains.

The types of glaciers are:

An alpine glacier in the Swiss Alps. Where do you think the word "alpine" came from? 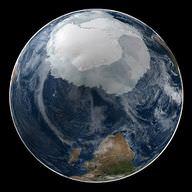 The continent of Antarctica is covered with an ice cap.

Glaciers are not static; they grow, they move, and they shrink. Currently, most glaciers are shrinking.

Glaciers grow when snowfall exceeds melting. Snow falls higher on the glacier. Over time, the snow converts to granular ice known as firn. As more snow and ice collect, the firn becomes denser. This is now glacial ice.

Glaciers form only on land because water is too warm. When a glacier flows into water, it usually breaks up into icebergs. Those icebergs eventually melt into the water.

How does an ice field become a glacier? In other words, why does the ice move? Whether an ice field moves depends on the amount of ice. It also depends on the steepness of the slope and the roughness of the ground surface. Ice moves where the pressure is so great that the ice needs to move away. Ice also slides at the bottom. Often the ground is lubricated by water that melted from the glacier above. Under some conditions, a glacier will move extremely fast. Under other conditions, the glacier may not move and will become an ice sheet.

Crevasses in a glacier are the result of movement.

Glaciers are melting back in many locations around the world. When a glacier no longer moves, it is called an ice sheet. This usually happens when it is less than 0.1 square kilometers in area and 50 m thick.

In Glacier National Park (Figure below), many glaciers have become ice sheets. In 1850, the park had 150 glaciers. There are only about 25 today. The reason that there is so much melting is that summer temperatures have risen. Scientists estimate that the park will have no active glaciers as early as 2020. 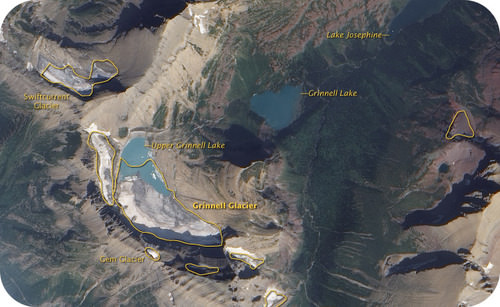 This satellite image shows Grinnell Glacier, Swiftcurrent Glacier, and Gem Glacier in 2003. The outlines show the extent of the glaciers in 1950. Gem Glacier is only 0.020 km2 (5 acres) in area. This makes it about one-fifth the size of the smallest active glaciers. Is Gem really a glacier?

Glaciers As A Resource