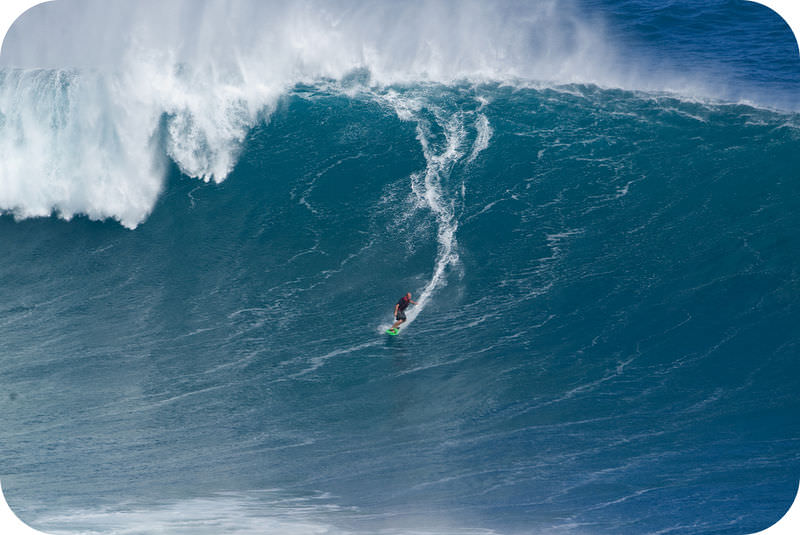 Jaws Beach in Maui, Hawaii, has legendary waves. The largest waves come when winds are very strong, usually in the winter. The rocks and reef offshore magnify the size of the incoming wave energy. Cowabunga!

Most ocean waves are caused by winds. A wave is the transfer of energy through matter. A wave that travels across miles of ocean is traveling energy, not water. Ocean waves transfer energy from wind to the water. The energy is transferred from one water molecule to the next. The energy of a wave may travel for thousands of miles. The water itself moves very little. The picture below shows how water molecules move when a wave goes by (Figure below). Once the wave starts, it doesn't need more wind to keep it going. 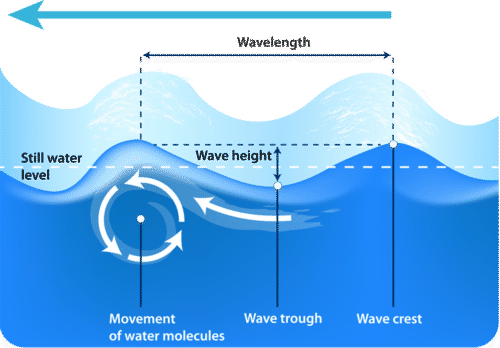 A wave travels through the water. How would you describe the movement of water molecules as a wave passes through?

The Size of Waves

The figure above also shows how the size of waves is measured (Figure above). The highest point of a wave is the crest. The lowest point is the trough. The vertical distance between a crest and a trough is the wave height. Wave height is also called amplitude. The horizontal distance between two crests is the wavelength. Both amplitude and wavelength are measures of wave size.

The size of an ocean wave depends on how fast, over how great a distance, and how long the wind blows. The greater each of these factors is, the bigger a wave will be. Some of the biggest waves result from hurricanes. A hurricane is a storm that forms over the ocean. Its winds may blow more than 150 miles per hour! The winds also travel over long distances and may last for many days.

The figure below shows what happens to waves near shore (Figure below). As waves move into shallow water, they start to touch the bottom. The base of the waves drag and slow. Soon the waves slow down and pile up. They get steeper and unstable as the top moves faster than the base. When they reach the shore, the waves topple over and break. 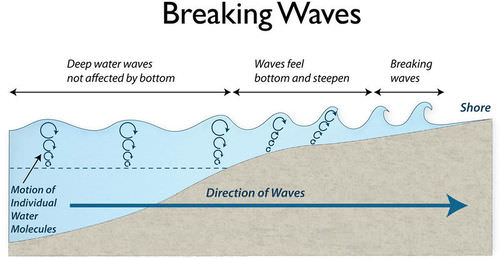 Waves break when they reach the shore.

Some of the damage done by storms is from storm surge. Low pressure in a storm pulls water upward. Water piles up at a shoreline as storm winds push waves into the coast. Storm surge may raise sea level as much as 7.5 m (25 ft). This can be devastating in a shallow land area when winds, waves, and rain are intense.

Maverick waves are massive. Learning how they are generated can tell scientists a great deal about how the ocean creates waves and especially large waves.