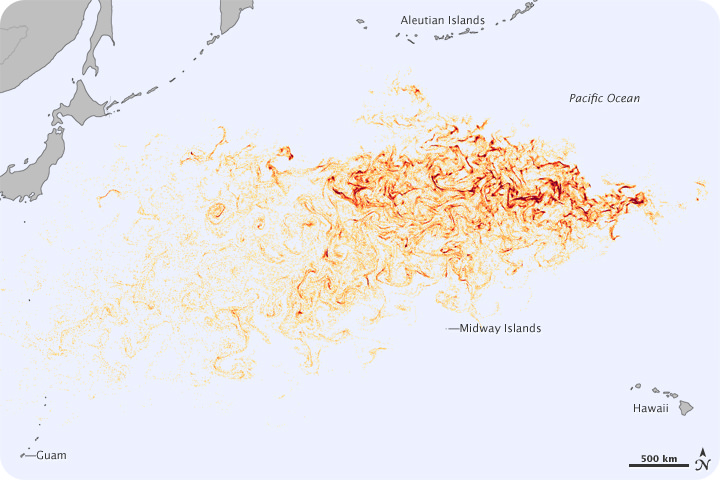 What can debris tell us about surface currents?

The surface of the ocean is on the move. One way to see this is when something is dumped in the ocean. Where will it end up? The tsunami that struck Japan in March 2011 pulled a lot of material into the ocean. The image above is a model created in April 2012. The orange and red are where floating debris might be. Scientists are creating models of where the debris will go. But no one knows for sure where it will go or when it will get there.

Like air in the atmosphere, ocean water moves in currents. A current is a stream of moving water that flows through the ocean. Surface currents are caused mainly by winds but not daily winds. Surface currents are caused by the major wind belts. These winds blow in the same direction all the time. So they can keep water moving in the same direction.

Winds on Earth are either global or local. Global winds blow in the same directions all the time. They are created when more solar energy strikes the Equator than the polar regions. More about global wind patterns is described in detail in the concept Global Wind Belts.

The major wind belts push the water in the surface currents. The water moves in the direction of :

The rotation of the Earth—that is, the Coriolis effect—causes the ocean currents to turn. More information about the phenomenon can be found in the concept Coriolis Effect.

Shape of the Ocean Basins

A surface current moves across the ocean. Eventually, the current runs into land (Figure below). When it does, it turns right in the Northern Hemisphere and left in the Southern Hemisphere. The direction is due to Coriolis effect. 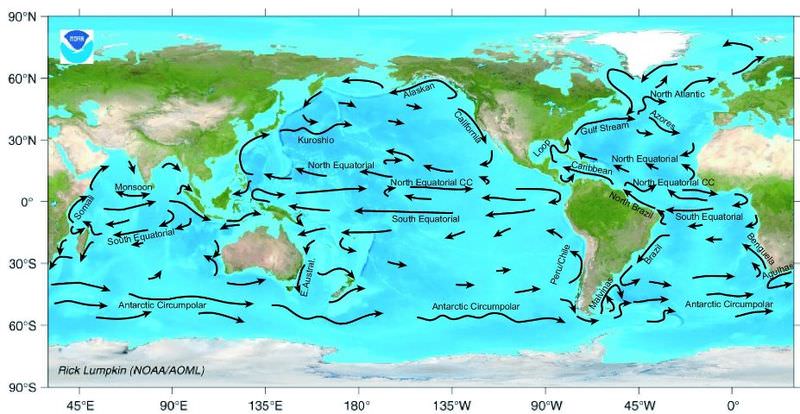 The major surface currents are pictured below (Figure below). They flow in a clockwise direction in the Northern Hemisphere. In the Southern Hemisphere, they flow in the opposite direction. These loops are called gyres. Only the Antarctic Circumpolar Current flows nonstop around the globe. 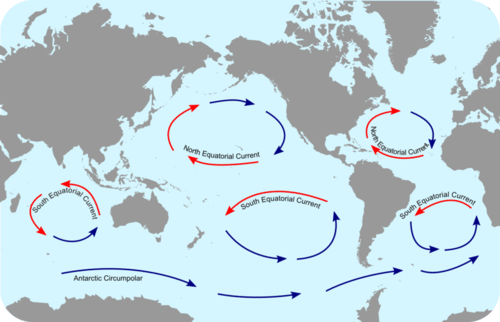 Currents are also found along shorelines (Figure below). They are not related to the global wind belts. Two are longshore currents and rip currents.

Longshore currents move water and sediment parallel to the shore. They move in the direction of the prevailing local winds.

Rip currents are very dangerous currents! Rip currents move large amounts of water offshore quickly. Each summer in the United States, at least a few people die when they are caught in rip currents.