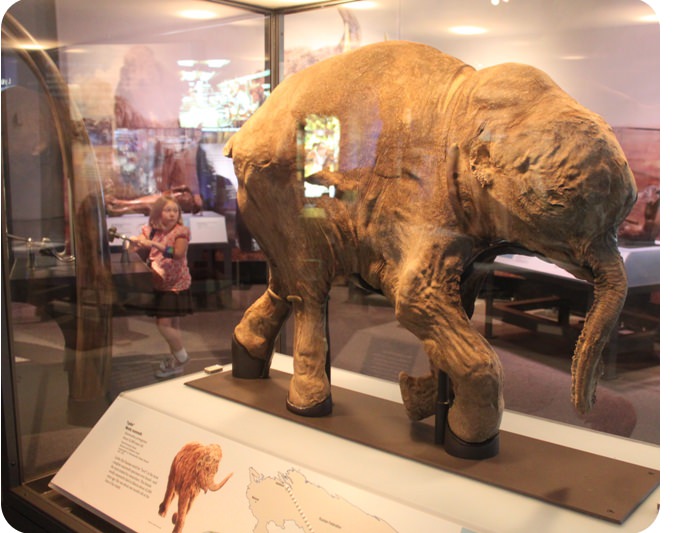 Where could you find the best fossils?

The best fossils would probably be ones that you could get DNA from. DNA holds the genes of an organisms. The genes could tell scientists a lot about what the organisms was really like. Where could you find a fossil with DNA? How about a melting glacier? You might be able to find a creature that had been frozen into the ice for a long time. A frozen animal would be very well preserved!

The process by which remains or traces of living things become fossils is called fossilization (Figure below). Most fossils are preserved in sedimentary rocks.

Most fossils form when a dead organism is buried in sediment. Layers of sediment slowly build up. The sediment is buried and turns into sedimentary rock. The remains inside the rock also turn to rock. The remains are replaced by minerals. The remains literally turn to stone. This type of fossilization is called permineralization. 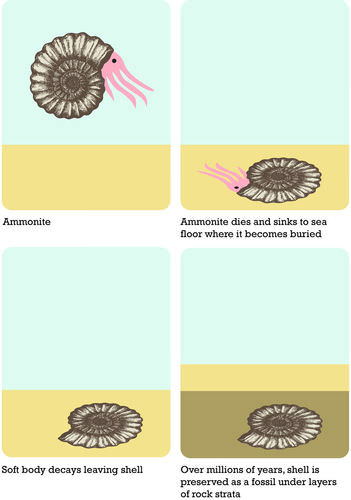 Fossilization. This flowchart shows how most fossils form.

Fossils may form in other ways. With complete preservation, the organism doesn't change much. As pictured below (Figure below), tree sap may cover an organism and then turn into amber. The original organism is preserved so that scientists might be able to study its DNA. Organisms can also be completely preserved in tar or ice. 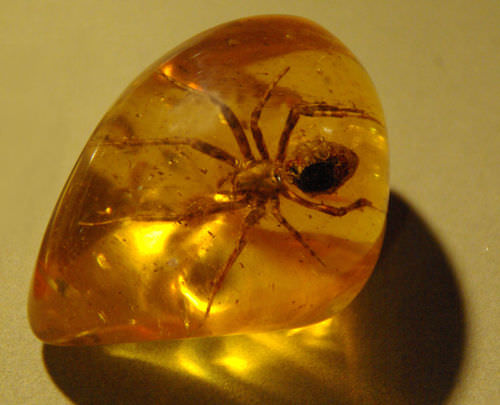 Complete Preservation. This spider looks the same as it did the day it died millions of years ago!

Molds and casts are another way organisms can be fossilized. A mold is an imprint of an organism left in rock. The organism's remains break down completely. Rock that fills in the mold resembles the original remains. The fossil that forms in the mold is called a cast (Figure below). Molds and casts usually form in sedimentary rock. With compression (Figure below), an organism's remains are put under great pressure inside rock layers. This leaves behind a dark stain in the rock. 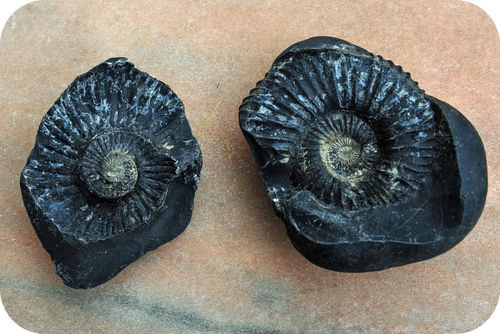 Molds and Casts. A mold is a hole left in rock after an organism's remains break. A cast forms from the minerals that fill that hole and solidify.

Compression. A dark stain is left on a rock that was compressed. These leaves were fossilized by compression.

Why Fossilization Is Rare

It’s very unlikely that any given organism will become a fossil. The remains of many organisms are consumed. Remains also may be broken down by other living things or by the elements. Hard parts, such as bones, are much more likely to become fossils. But even they rarely last long enough to become fossils. Organisms without hard parts are the least likely to be fossilized. Fossils of soft organisms, from bacteria to jellyfish, are very rare.