Shell beds are found high in the Andes Mountains. How did they get there? This is more evidence that Earth is a dynamic planet! The rock that is on top of the mountains was once beneath the sea. Due to plate tectonics, the mountains rose slowly above the ocean. This process took a really long time. This is one way we know that Earth is really old!

Of all the organisms that ever lived, only a tiny number became fossils. Still, scientists learn a lot from fossils. Fossils are our best clues about the history of life on Earth.

What can we learn from fossil clues like this fish fossil found in the Wyoming desert?

Trilobite fossils (Figure below) are common index fossils. Trilobites were widespread marine animals. They lived between 500 and 600 million years ago. Rock layers containing trilobite fossils must be that age. Different species of trilobite fossils can be used to narrow the age even more. 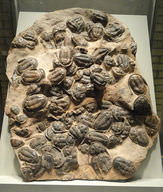