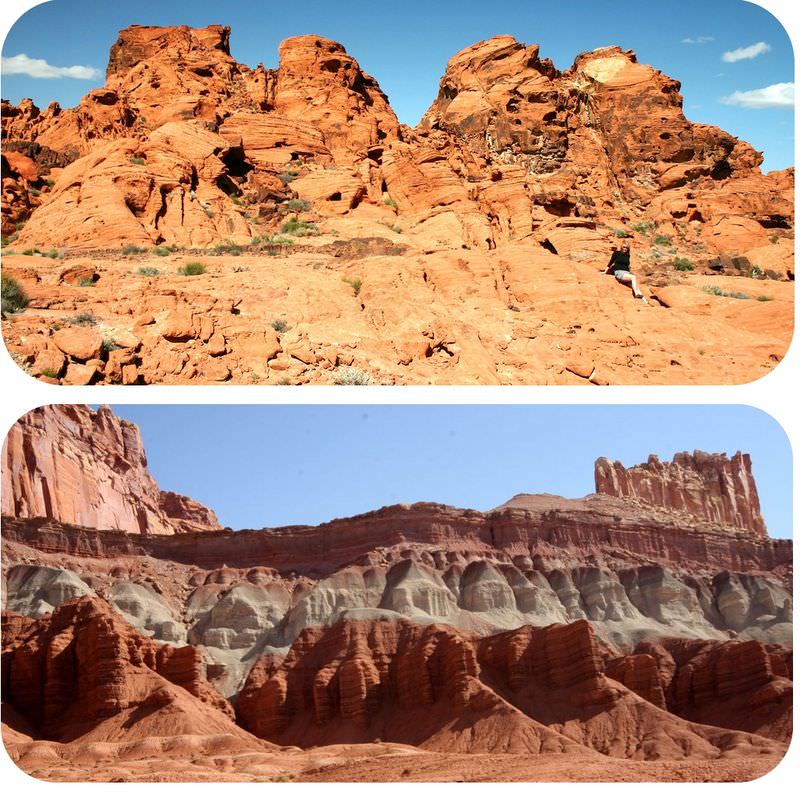 How would you correlate two rock units?

On a field trip in the southwestern United States you would see some very unique rock layers. You might see a distinctive whitish rock unit that looks like sand dunes. This rock is the Navajo Sandstone. The first photo is from the Valley of Fire near Las Vegas, Nevada. The second is from Capitol Reef National Park in Utah. These sites are roughly 250 miles apart. Sand dunes stretched across this part of the country during the Mesozoic.

Some rock layers extend over a very wide area. They may be found on more than one continent or in more than one country. They are matched up by correlation. For example, the famous White Cliffs of Dover are on the coast of southeastern England. These distinctive rocks are matched by similar white cliffs in France, Belgium, Holland, Germany, and Denmark (Figure below). It is important that this chalk layer goes across the English Channel. The rock is so soft that the Channel Tunnel connecting England and France was carved into it!

Chalk Cliffs. (A) Matching chalk cliffs in Denmark and (B) in Dover, U.K.

Like index fossils, key beds are used to match rock layers. A key bed is a thin layer of rock. The rock must be unique and widespread. For example, a key bed from around the time that the dinosaurs went extinct is very important. A thin layer of clay was deposited over much of Earth’s surface. The clay has large amount of the element iridium. Iridium is rare on Earth but common in asteroids. This unusual clay layer has been used to match rock up layers all over the world. It also led to the hypothesis that a giant asteroid struck Earth and caused the dinosaurs to go extinct.

Index fossils are commonly used to match rock layers in different places (Figure below). If two rock layers have the same index fossils, then they’re probably about the same age.

Using Index Fossils to match rock layers. Rock layers with the same index fossils must have formed at about the same time. The presence of more than one type of index fossil provides stronger evidence that rock layers are the same age.