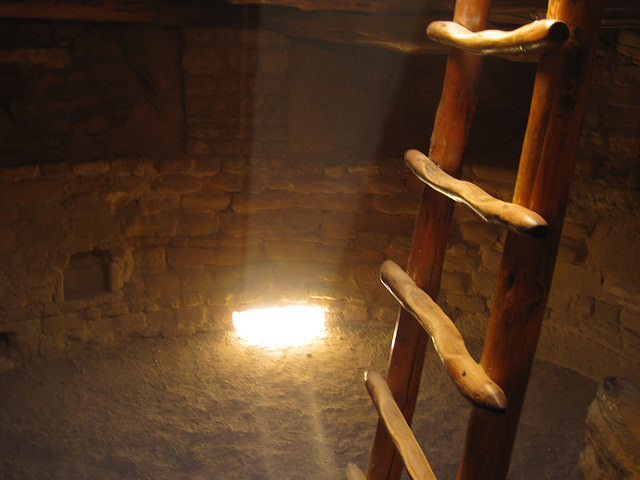 Can wood give an age in another way?

In the section on tree ring dating, there was a photo of a ruin at Mesa Verde National Park. This photo is also from Mesa Verde. In archeological sites, wood can be dated by tree rings. It can also be dated by radiometric dating. Carbon-14 dating is very useful for ruins that contain wood. If the tree died around the time the ladder was created, then carbon-14 can tell the age of the ladder. If the ladder was built for the site, then that age will be the age of the archeological site.

The rate of decay of unstable isotopes can be used to estimate the absolute ages of fossils and rocks. This type of dating is called radiometric dating.

Carbon-14 has a relatively short half-life. It decays quickly compared to some other unstable isotopes. So carbon-14 dating is useful for specimens younger than 50,000 years old. That’s a blink of an eye in geologic time. But radiocarbon dating is very useful for more recent events. One important use of radiocarbon is early human sites. Carbon-14 dating is also limited to the remains of once-living things. To date rocks, scientists use other radioactive isotopes.

Radiometric dating is a very useful tool, but it does have limits: