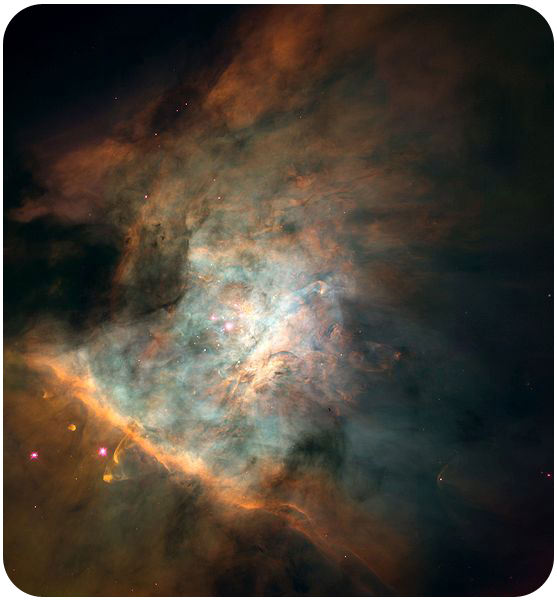 Where are stars born? Are stars being born right now?

Stars are born in clouds like the one in the picture. Gravity pulls material together. When it is extremely dense, it begins nuclear fusion. That is, it becomes a star. We can see places where stars are being born right now. Of course, it takes light a long time to travel to us. So what we see right now may have happened many millions or even billions of years ago.

Formation of the Solar System

Our solar system began about 5 billion years ago. The Sun, planets, and other solar system objects all formed at about the same time. The leading hypothesis for how they formed is called the nebular hypothesis.

The Sun and planets formed from a giant cloud of gas and dust. This was the solar nebula. The cloud contracted and began to spin. As it contracted, its temperature and pressure increased. The cloud spun faster and formed into a disk. Scientists think the solar system at that time looked like these disk-shaped objects in the Orion Nebula. New stars are forming in the Orion Nebula today. 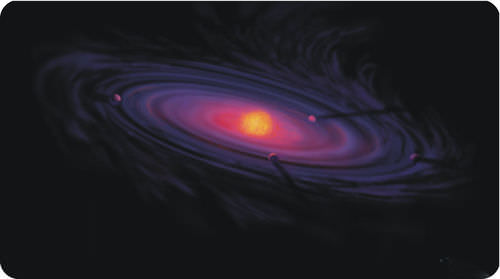 An artist’s painting of a protoplanetary disk.

Meanwhile, the outer parts of the disk were cooling off. Matter condensed from the cloud. Small pieces of dust started clumping together. These clumps collided and combined with other clumps. Gravity brought more clumps together to make larger bodies. Gravity at the center of the disk attracted rock and metal. Lighter material remained farther out in the disk. Eventually, these small bodies grew to become the planets and moons that we find in our solar system today.

Since gravity pulled the more dense material inward, the inner planets—Mercury, Venus, Earth, and Mars—are made of rock and metal. The outer planets—Jupiter, Saturn, Uranus, and Neptune—condensed farther from the Sun (Figure below). They are made from lighter materials, such as hydrogen, helium, water, ammonia, and methane. Out by Jupiter and beyond, where it’s very cold, these materials form solid particles. Dwarf plants, comets, and asteroids formed too. 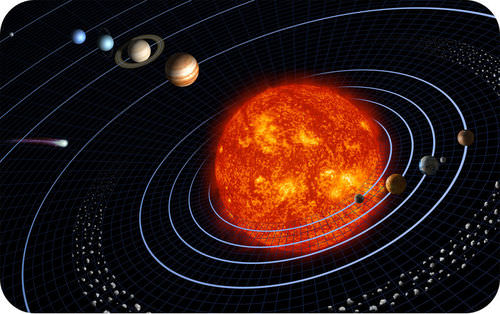 The Sun and planets (note that this image is old enough to include Pluto, which is no longer considered one of the planets).

The nebular hypothesis explains the basic features of the solar system:

The center of the nebula became a star, our Sun!