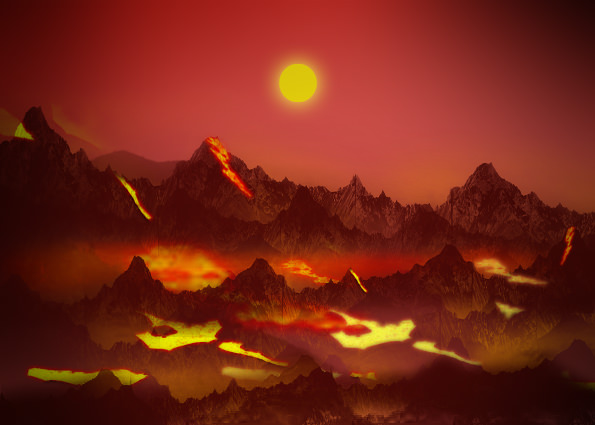 Earth was not always the planet it is today. In its earliest days, Earth was scorching hot. It did not have an atmosphere or water. If life originated early on, it was wiped out by the terrible conditions.

Formation of Earth and Moon

Material at similar distances from the Sun collided together to form each of the planets. Earth grew from material in its part of space. The Moon’s origin is completely different from Earth’s.

Earth formed like the other planets. Different materials in its region of space collided. Eventually, the material made a planet. All of the collisions caused Earth to heat up. Rock and metal melted. The molten material separated into layers. Gravity pulled the denser material into the center. The lighter elements rose to the surface (Figure below). Because the material separated, Earth’s core is made mostly of iron. Earth’s crust is made mostly of lighter materials. In between the crust and the core is Earth’s mantle, made of solid rock. 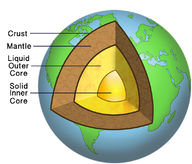 This model for how the Moon formed is the best fit of all of the data scientists have about the Moon.

In the early solar system, there was a lot of space debris. Asteroids flew around, sometimes striking the planets. An asteroid the size of Mars smashed into Earth. The huge amount of energy from the impact melted most of Earth. The asteroid melted too. Material from both Earth and the asteroid was thrown out into orbit. Over time, this material smashed together to form our Moon. The lunar surface of the Moon is about 4.5 billion years old. This means that the collision happened about 70 million years after Earth formed.