Could these mountains have existed in the Paleozoic?

Sure! There have been lots of huge mountain ranges in Earth history. When continents collide, big mountains grow. The formation of Pangaea created long large mountain ranges. The mountains that formed then probably looked a lot like the Himalayas do today.

The Phanerozoic is recent history compared with the Precambrian. This is one reason that the Paleozoic is much better known than the Precambrian. Another reason is that Paleozoic organisms had hard parts, and they fossilized better.

A mountain-building event is called an orogeny. Orogenies take place over tens or hundreds of millions of years. Continents smash into each other. Microcontinents and island arcs smash into continents. All of these events cause mountains to rise.

When Pangaea came together, there were orogenies all along the collision zones. Geologists find much evidence of these orogenies. For example, Laurentia collided with the Taconic Island Arc during the Taconic Orogeny (Figure below). The remnants of this mountain range make up the Taconic Mountains in New York. 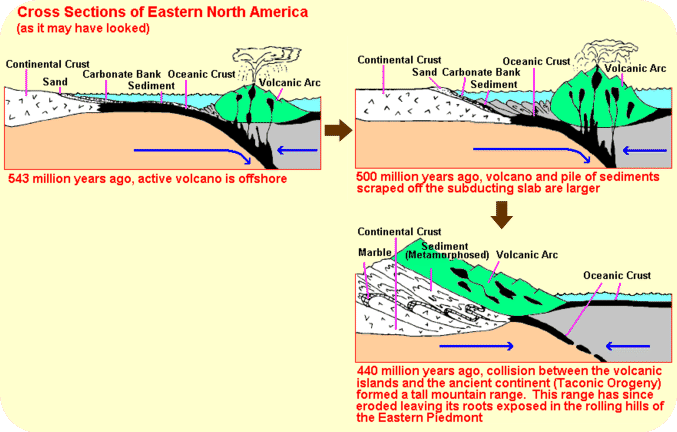 The Taconic Orogeny is an example of a collision between a continent and a volcanic island arc.

As the continents move, the shape of the oceans changes too. At the time of Pangaea, most of Earth’s water was collected in a huge ocean. This ocean was called Panthalassa (Figure below). 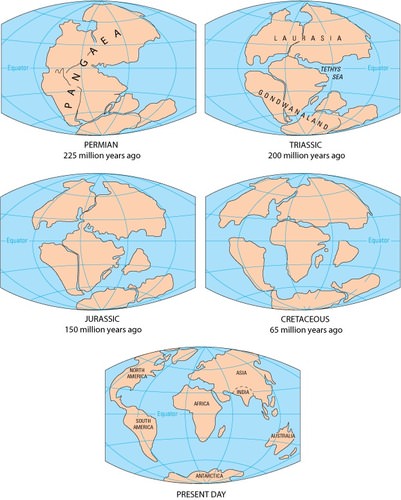 Pangaea was the sole landform 250 million years ago. The rest of the planet was a huge ocean called Panthalassa, along with a few smaller seas.