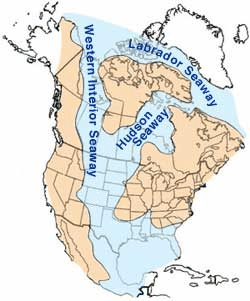 Do you like the beach? If so, the Paleozoic may be for you!

If we were living right now at the time of a marine transgression, there would be a lot more beach. Surf's up! 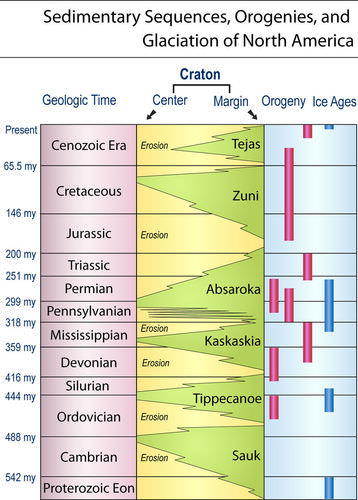 Six marine transgressions and regressions have occurred during the Phanerozoic.

What makes sea level rise? There are two possibilities: either the land sinks or the water level rises. Tectonic processes can cause the land to sink. Melting glaciers can cause the water level to rise. Sea level rises if seafloor spreading goes faster. The hotter crust is buoyed up and displaces the water. This causes the ocean basin to become smaller. What could cause sea level to fall in a marine regression? Land rises up. Glaciers grow. Seafloor spreading slows down. Just the opposite of what makes sea level rise!

Geologists think that the Paleozoic marine transgressions and regressions were the result of the decrease and increase in the size of glaciers covering the lands.

Geologists know about marine transgressions and regressions from sedimentary rocks. These events leave characteristic rock layers known as sedimentary facies. Sand and other coarse grained rock fragments are deposited on the beach where the wave energy is high. Offshore in lower energy environments, fine-grained silt is deposited. Farther offshore in lower energy waters, carbonate mud that later hardens is deposited. The rocks that result are sandstone, shale, and limestone. As the sea moves on or offshore, one rock layer is on top of the other.