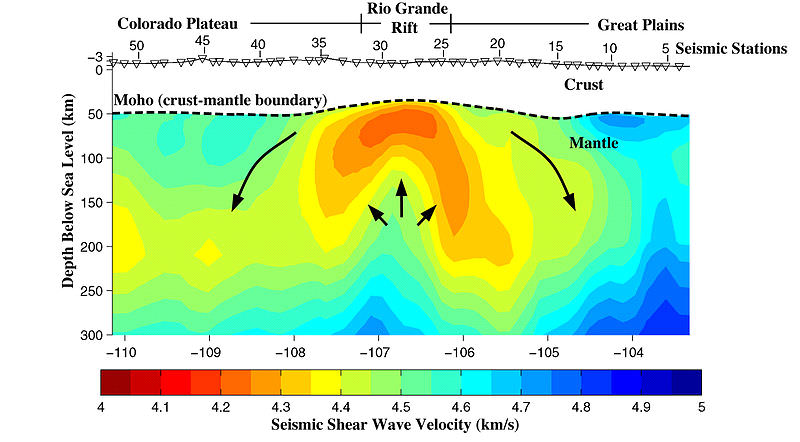 Why would a supercontinent break up?

A continent is like a giant blanket that traps heat. Heat from the mantle comes up but cannot escape through the continent. This image shows hot material beneath New Mexico. The heat is trapped beneath the North American plate. The hot material is causing rifting to begin. This is known as the Rio Grande Rift.

Why would a supercontinent break up? Remember that Earth's interior is hot. Heat builds up beneath the supercontinent. This causes the continent to buoy upward. Continental rifting begins. Basalt lava fills in the rift. This could lead to seafloor spreading and the formation of a new ocean basin. This basalt province is where Africa is splitting apart and generating basalt lava. (Figure below) 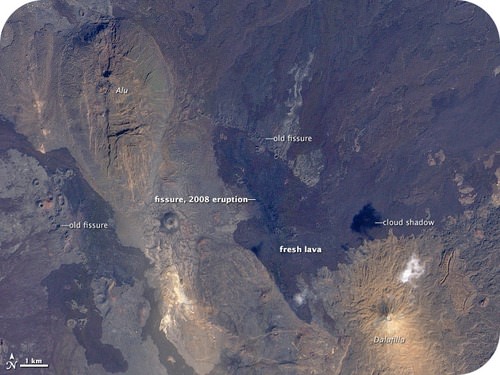 In the Afar Region of Ethiopia, Africa is splitting apart. Three plates are pulling away from a central point.

The Breakup of Pangaea

At the end of the Paleozoic, there was one continent and one ocean. Then Pangaea began to break apart about 180 million years ago. The Panthalassa Ocean separated into the individual but interconnected oceans that we see today on Earth.

The moving continents collided with island arcs and microcontinents. Mountain ranges grew near the continents’ edges. The oceanic Farallon plate subducted beneath western North America during the late Jurassic and early Cretaceous. This activity produced igneous intrusions and other structures. The intrusions have since been uplifted. They are exposed in the Sierra Nevada Mountains (Figure below).

The snow-covered Sierra Nevada is seen striking SE to NW across the eastern third of the image. The mountain range is a line of uplifted batholiths from Mesozoic subduction.