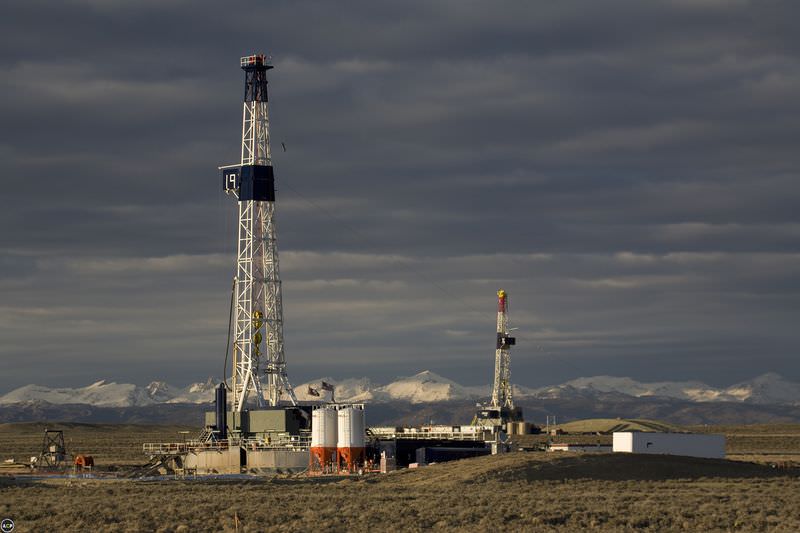 What is this unusual sight?

There's oil beneath this land. These drill rigs are pumping it to the surface. Drill rigs can be small and closely spaced. They can be large and solitary. This is true, especially when they are in deep water offshore.

Oil is a thick, dark brown or black liquid. It is found in rock layers of Earth's crust. Oil is currently the most commonly used source of energy in the world.

The way oil forms is similar, in many ways, to coal. Tiny organisms like plankton and algae die and settle to the bottom of the sea. Sediments settle over the organic material. Oxygen is kept away by the sediments. When the material is buried deep enough, it is exposed to high heat and pressure. Over millions of years, the organic material transforms into liquid oil.

The United States produces only about one-quarter as much oil as it uses. The main oil producing regions in the U.S. are the Gulf of Mexico, Texas, Alaska, and California.

Geologists look for oil in folded layers of rock called anticlines (Figure below). Oil moves through permeable rock and is trapped by the impermeable cap rock. 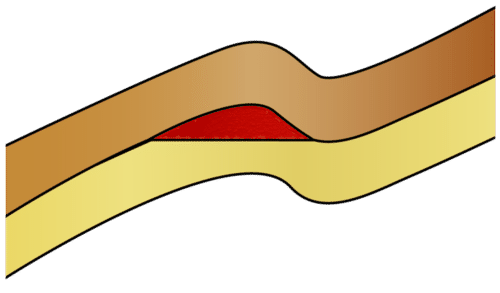 Oil (red) is found in the porous rock layer (yellow) and trapped by the impermeable layer (brown). The folded structure has allowed the oil to pool so a well can be drilled into the reservoir.

Oil comes out of the ground as crude oil. Crude oil is a mixture of many different hydrocarbons. Oil is separated into different compounds at an oil refinery. This is done by heating the oil. Each hydrocarbon compound in crude oil boils at a different temperature. We get gasoline, diesel, heating oil, waxes, plastics, and fertilizers from crude oil.

These fuels are rich sources of energy. Since they are mostly liquids, they can be easily transported. These fuels provide about 90% of the energy used for transportation around the world.

Gasoline is a concentrated resource. It contains a large amount of energy for its weight. This is important because the more something weighs, the more energy is needed to move it. If gasoline could provide only a little energy, a car would have to carry a lot of it to be able to travel very far, or the car would need to be filled up frequently. So a highly concentrated energy resource is a practical fuel to power cars and other forms of transportation.

Let's consider how gasoline powers a car. As gasoline burns, it releases most of its energy as heat. It also releases carbon dioxide gas and water vapor. The heat makes the gases expand. This forces the pistons inside the engine to move. The engine makes enough power to move the car.

Using gasoline to power automobiles affects the environment. The exhaust fumes from burning gasoline cause air pollution. These pollutants include smog and ground-level ozone. Air pollution is a big problem for cities where large numbers of people drive every day. Burning gasoline also produces carbon dioxide. This is a greenhouse gas and is a cause of global warming. Similar pollutants come from other forms of oil.