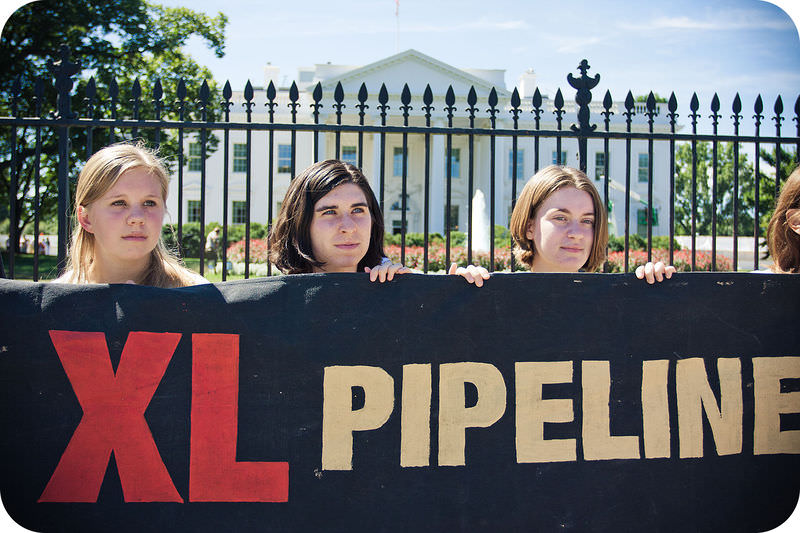 Take a trip to Washington, D.C.?

People are always protesting in our nation's capital. That's part of liberty, part of democracy. The people in this photo are protesting the Keystone XL pipeline. Other people in other locations may be protesting for the pipeline. The Keystone Pipeline would bring crude oil from tar sands to the United States. People in favor say the oil from tar sands will bring down energy costs and provide jobs. People opposed say that the environmental consequences are not worth the benefits.

Oil shale is rock with oil dispersed through it. The oil has not collected in reservoirs. Oil shale is mined in open pit mines. To extract the oil from the rock, the rock is first crushed and heated to very high temperatures. Water is washed over the rock, which converts the fuel to petroleum. The petroleum can then be extracted from the rock. You can see an example of an oil shale facility below (Figure below).

An image of an oil shale facility in Colorado.

Tar sands are rocky materials mixed with very thick oil. The tar is too thick to pump, and so tar sands are strip-mined. Hot water and caustic soda are used to separate the oil from the rock. This creates a slurry, which is shaken. The oil floats to the top and is skimmed off.

About 75% of the tar sands in the world are in Venezuela and Alberta, Canada (Figure below). Large areas of land are degraded when tar sands are mined. A tremendous amount of waste rock is produced from mining tar sands. 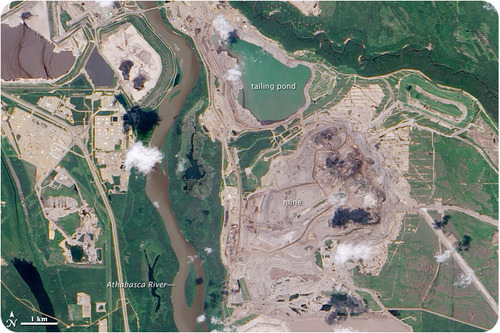 A satellite image of an oil-sands mine in Canada.

Surface mining causes environmental damage. A lot of water may be needed. The water may be degraded. For oil to be removed from shale, the water must be heated. This requires energy. Tar sands and oil shale fuels create more pollutants than other fossil fuels. Extracting usable energy from oil shale and tar sands produces more greenhouse gases.

The Keystone XL Pipeline would transport oil from the oil sands in Alberta, Canada. The oil would travel into the United States. In the U.S. it would be refined. The pipeline is controversial. A leak could cause damage to wildlife habitat. A leak could also release enough oil to contaminate the Ogallala Aquifer. The Aquifer is crucial to agriculture and urban development in the Midwestern U.S. When burned, the fuel from the oil sands would increase pollutants. Greenhouse gases into the atmosphere would increase. The future of the pipeline is currently on hold.