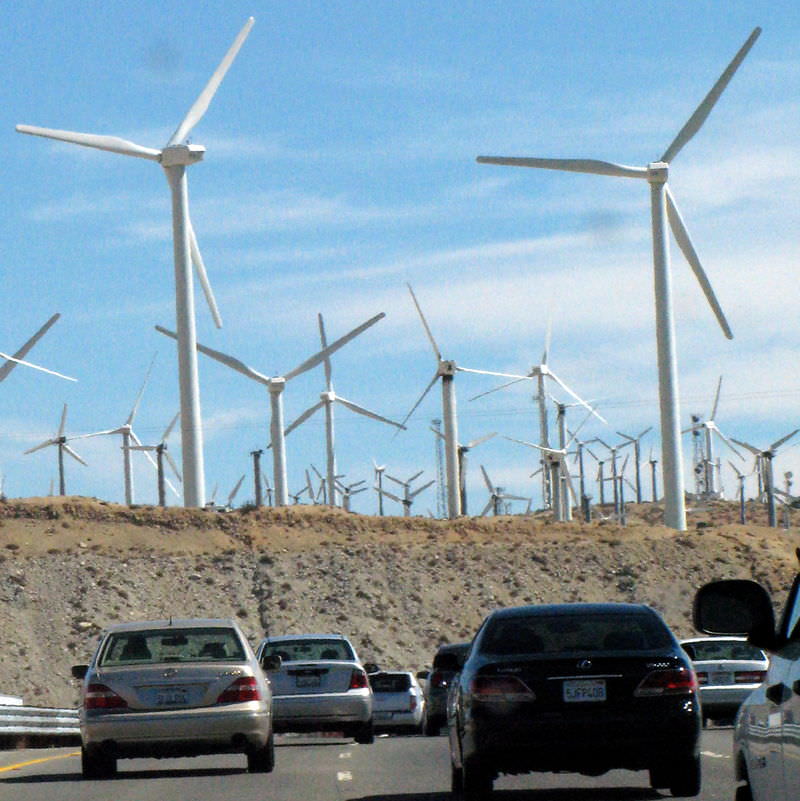 It's a strange sight. You're driving up the road in Southern California, and sprouting from the ground is a pack of windmills! Windmills are becoming more common on the eastern side of the mountains. This is because the wind comes off the Pacific Ocean and funnels through mountain passes. The wind is strong and California wants to take advantage of it.

Winds funnel through passes in mountain ranges. Altamont Pass in California is the site of many wind turbines.

The energy from the Sun creates wind (Figure above). Wind energy moves by convection. The Sun heats some locations more than others. Warm air rises, so other air rushes in to fill the hole left by the rising air. This horizontal movement of air is called wind.

Wind as a Resource

Wind power uses moving air as a source of energy. Some types of wind power have been around for a long time. People have used windmills to grind grain and pump water for hundreds of years. Sailing ships have depended on wind for millennia. Wind is now used to generate electricity. Moving air can make a turbine spin, just like moving water can. Moving air has kinetic energy. When wind hits the blades of the turbine, the kinetic energy makes the blades move. The turbine spins and creates electricity.

Wind power has many advantages. It is clean: it does not release pollutants or carbon dioxide. It is plentiful almost everywhere. The technology to harness wind energy is being developed rapidly.

Wind power also has problems. Wind does not blow all of the time, so wind energy must be stored for later use. Alternatively, another energy source needs to be available when the wind is not blowing. Wind turbines are expensive. They can wear out quickly. Finally, windmills are not welcomed by residents of some locations. They say that they are unattractive. Yet even with these problems, wind turbines are a competitive form of renewable energy.

Many states are currently using wind power. Wind turbines are set up in mountain passes. This is common in California, where cool Pacific Ocean air is sucked across the passes and into the warmer inland valleys.