What is the difference between these two stands of trees?

Trees are renewable resources. Trees can be planted, grown up, and harvested for timber. Forests are a different thing, however. A forest is a mature ecosystem. It has trees of different sizes and ages, many other plants, and lots of animals. A forest is a renewable resource, but it takes much more time to grow a forest than to grow a stand of trees.

Just because a resource is renewable doesn’t mean we should use it carelessly. If we aren’t careful, we can pollute resources. Then they may no longer be fit for use. Water is one example. If we pollute a water source, it may not be usable for drinking, bathing, or any other type of use. We can also overuse resources that should be renewable. In this case, the resources may not be able to recover. For example, fish are renewable resources. That’s because they can reproduce and make more fish. But water pollution and overfishing can cause them to die out if their population becomes too low. Another example is pictured below (Figure below). 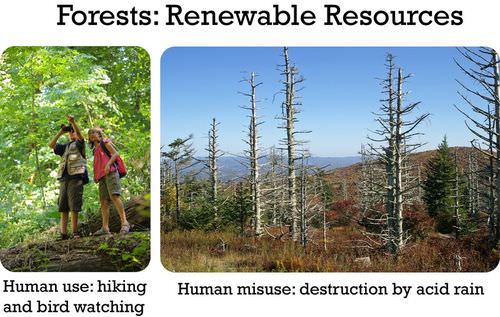 Some resources can’t be renewed. At least, they can’t be renewed fast enough to keep up with use. Fossil fuels are an example. It takes millions of years for them to form. We are using them up much more quickly than they are forming. Elements that are used to produce nuclear power are also non-renewable resources. Uranium, for example, which is rare. Sooner or later, it will run out.

Supplies of non-renewable resources are shrinking. This makes them harder to get. Oil is a good example. Oil reserves beneath land are running out. So oil companies have started to drill for oil far out in the ocean. This costs more money. It’s also more dangerous. Pictured below is an oil rig that exploded in 2010 (Figure below). The explosion killed 11 people. Millions of barrels of oil spilled into the water, severely damaging marine ecosystems. It took months to plug the leak. 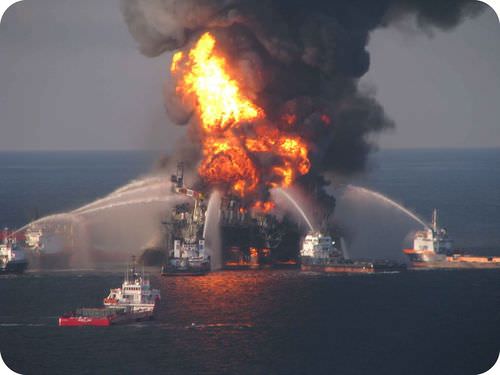 This oil rig was pumping oil from below the ocean floor when it exploded.