Graphs in the Coordinate Plane

Previously, you graphed ordered pairs. This Concept will expand upon your knowledge of graphing ordered pairs to include vocabulary and the naming of specific items related to ordered pairs.

A two-dimensional (2-D) coordinate has the form (x,y).

Let's find the coordinates of the two points on the graph below:

Not all axes will be labeled for you. There will be many times you are required to label your own axes. Some problems may require you to graph only the first quadrant. Others need two or all four quadrants. The tic marks do not always count by ones. They can be marked in increments of 2, 5, or even 12. The axes do not even need to have the same increments. The Cartesian plane below shows an example of this.

The increments by which you count your axes should MAXIMIZE the clarity of the graph.

A relation is a set of ordered pairs.

A function is a relation in which every x−coordinate matches with exactly one y−coordinate.

The set of all possible x−coordinates is the domain.

The set of all possible y−coordinates is called the range.

Suppose you kept track of the amount of money you earned for different hours of babysitting. This would be a relation. You can graph the information in this table to visualize the relationship between these two variables.

Now, suppose you read a book and can read twenty pages an hour. There is a relationship between how many hours you read and how many pages you read. You may even know that you could write the formula as either:

To graph this relation, you could make a chart. By picking values for the number of hours, you can determine the number of pages read. By graphing these coordinates, you can visualize the relation.

This relation appears to form a straight line. Therefore, the relationship between the total number of read pages and the number of hours can be called linear. The study of linear relationships is the focus of the next series of lessons.

To graph the doctor's data, you would plot the year on the x-axis and your heart rate on the y-axis. The domain would be all positive whole numbers and the range would be all positive numbers. If you were to read a graph with points, you would look for the year on the x-axis and move up to find the y-value which would represent your heart rate for that year.

Graph the following points, and give their coordinates:

In 1 – 6, identify the coordinates of the given letter. 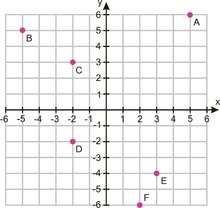 Graph the following ordered pairs on one Cartesian plane. Identify the quadrant in which each ordered pair is located.

In 15 – 22, using the directions given in each problem, find and graph the coordinates on a Cartesian plane. The directions tell how far the point should be from the origin.

To see the Review answers, open this PDF file and look for section 4.1.

Practice: Graphs in the Coordinate Plane