However, there are many units with which to measure angles. For example, the gradian was invented along with the metric system and it divides a circle into 400 equal parts. The sizes of these different units are very arbitrary.

A radian is a unit of measuring angles that is based on the properties of circles. This makes it more meaningful than gradians or degrees. How many radians make up a circle?

A radian is defined to be the central angle where the subtended arc length is the same length as the radius. 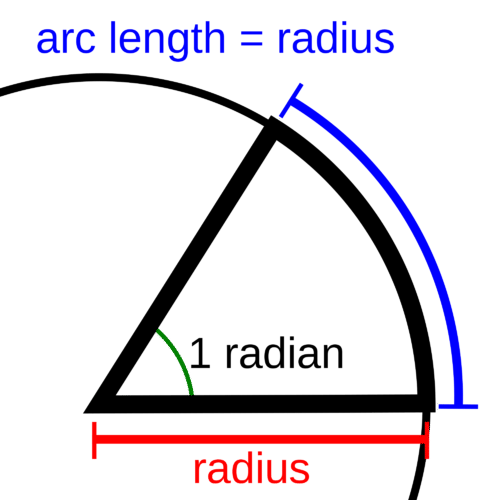 If an angle has no units, it is assumed to be in radians.

You can check your work by making sure the degree units appear on both the numerator and denominator.

Earlier, you were asked how many radians make up a circle. Exactly \(2 \pi\) radians describe a circular arc. This is because \(2 \pi\) radii wrap around the circumference of any circle.

Find the radian measure of each angle.

Find the degree measure of each angle.