How can I show that my hypothesis is wrong?

Many young scientists learn that a good scientist tries to disprove her hypothesis. This is the best way to be sure that your hypothesis is getting a rigorous test. Why do you think established scientists tell students this? Why is it a good idea?

How do you test a hypothesis? Often you need scientific tools, perhaps a microscope or a magnetometer. You need to know how to analyze the data that come from those tools. Often computers are needed to gather, analyze, and interpret the data.

In this example, we will look into the scientific literature to find data. These studies were done using scientific method. The scientists used the necessary tools and computers. To test a new hypothesis, we would need to do the experiments ourselves.

We will test the two hypothesis that we developed to explain this fact: Atmospheric CO2 has increased over the past five decades.

Hypothesis 1: Atmospheric CO2 has increased over the past five decades because the amount of CO2 gas released by volcanoes has increased.

To test Hypothesis 1, we need to see if the amount of CO2 gas released by volcanoes over the past several decades has increased.

There are two ways volcanoes could account for the increase in CO2:

Our research tells us that 50-70 eruptions occur every year. We see that the number of volcanic eruptions is about constant. We learn from different scientific papers that volcanic gas compositions have not changed over time. Different types of volcanoes have different gas compositions. However, the gases overall are the same. Another scientific paper states that major volcanic eruptions for the past 30 years have caused short-term cooling, not warming!

Hypothesis 1 is wrong! Volcanic activity is not able to account for the rise in atmospheric CO2. Remember that science is falsifiable. We can discard Hypothesis 1.

When a hypothesis is wrong, often much has been learned anyway. Rarely is the pursuit of a hypothesis a total loss!

To test hypothesis 2, we need to see if the amount of CO2 gas released by fossil fuels over the past several decades has increased. We look into the scientific literature and find the following graph (Figure below). 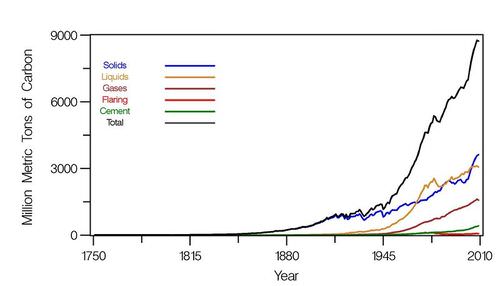 Fossil fuels have added an increasing amount of carbon dioxide to the atmosphere since the beginning of the Industrial Revolution in the mid 19th century. Hypothesis 2 appears to be at least partly true!

It is very important when testing hypotheses to eliminate any bias. A biased researcher may miss important factors that do not match his bias. It actually is good to try to disprove your own hypothesis! Having other researchers involved will also help to eliminate bias.