How do you know Earth rotates?

Something amazing happens every day (unless you live very far north or very far south)! The amazing thing is that the Sun rises in the east. It also sets in the west. We know that the Sun doesn't actually move around Earth. What causes the Sun to rise and set is that Earth rotates on its axis. This rotation creates day and night.

Imagine a line passing through the center of Earth. The line exits the planet at the top and at the bottom. The point at the top is the North Pole. The point at the bottom is the South Pole. This imaginary line is called an axis. The points are the north and south geographic poles. The geographic poles are different from the magnetic poles, and they are in different places on the planet. 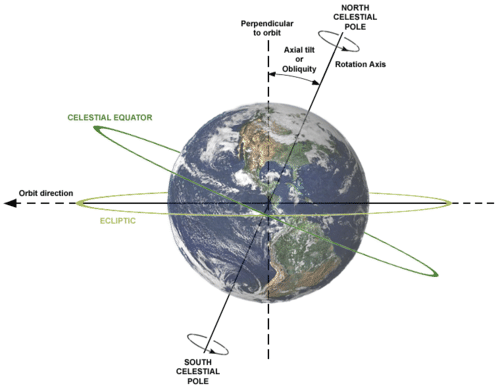 Note that Earth's axis of rotation is tilted. The axis is not perpendicular to the plane of the ecliptic. This plane is the one that solar system bodies are mostly lined up in.

To an observer looking down at the North Pole, Earth appears to rotate counterclockwise. From nearly all points on Earth, the Sun appears to move across the sky from east to west each day. Of course, the Sun is not moving from east to west at all; Earth is rotating. The Moon and stars also seem to rise in the east and set in the west.