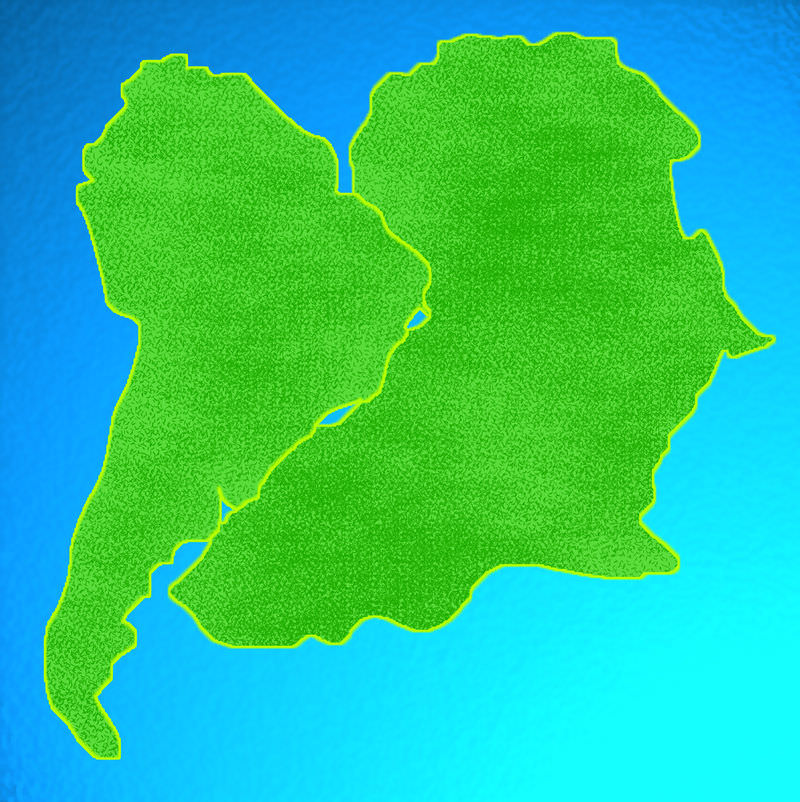 What does a scientist do with an interesting observation?

Alfred Wegener made an observation. From that observation, he made a hypothesis. He collected evidence that would support or refute his hypothesis. What did that process look like?

Alfred Wegener, born in 1880, was a meteorologist and explorer. In 1910, he noticed that South America and Africa appeared to fit together like puzzle pieces. He was certainly not the first person to notice this. But he was intrigued by the idea and thought a lot about it. He wondered if the two continents were once joined and then moved apart? He set out to find evidence to support or refute this idea.

Here is the main evidence that Wegener and his supporters collected for his continental drift hypothesis:

Fit of the Continents

The continents appear to fit together, and not just South America and Africa. If the continental margins are included, the fit is even better.

This figure shows the evolution of the continents, from the super-continent Pangaea to the way they look now.

Wegener found fossil evidence that the continents were once joined (Figure below). The same type of plant and animal fossils are found on continents that are now widely separated. These organisms would not have been able to travel across the oceans. So how did the fossils get so far apart?

Fossils of the seed fern Glossopteris are found across all of the southern continents. These seeds are too heavy to be carried across the ocean by wind. Mesosaurus fossils are found in South America and South Africa. Mesosaurus could swim, but only in fresh water. Cynognathus and Lystrosaurus were reptiles that lived on land. Both of these animals were unable to swim at all. Their fossils have been found across South America, Africa, India, and Antarctica.

Wegener thought that all of these organisms must have lived side by side. The lands later moved apart so that the fossils are separated. 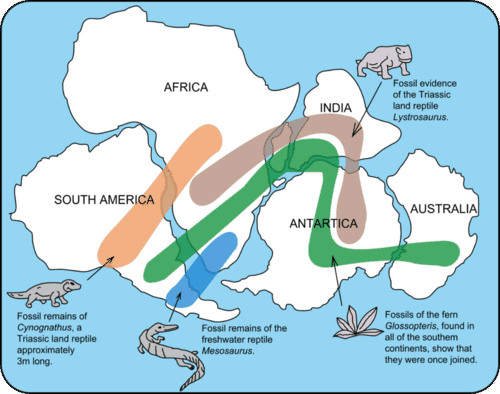 Wegener used fossil evidence to support his continental drift hypothesis. The fossils of these organisms are found on lands that are now far apart. Wegener suggested that when the organisms were alive, the lands were joined and the organisms were living side-by-side.

Distribution of Rocks and Structures

Wegener found rocks of the same type and age on both sides of the Atlantic Ocean. He thought that it could not be a coincidence! He said that the rocks must have formed side by side. These rocks then drifted apart on separate continents.

Wegener looked at evidence from ancient glaciers. Glaciers are found in very cold climates near the poles. The evidence left by some ancient glaciers is very close to the Equator. Did glaciers once exist near the equator? Wegener knew that this was extremely unlikely! However, if the continents had moved, the glaciers would have been centered close to the South Pole.

Coral reefs are found only in warm water. Coal swamps are also found in tropical and subtropical environments. Wegener discovered ancient coal seams and coral reef fossils in areas that are much too cold today. Wegener thought that ancient coral and coal plants existed at about the same latitude where they are found today. He again stated that it was the continents that moved.