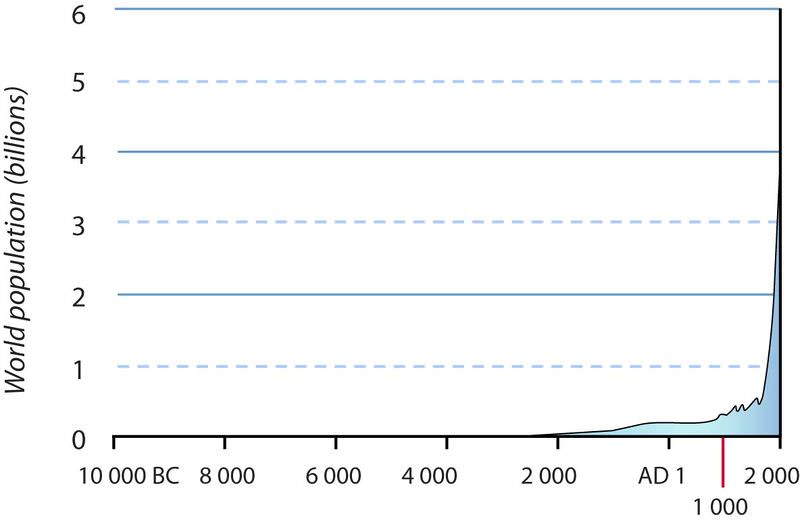 Where on the graph are the major population changes?

Let's look at this graph again. It shows human population from 10,000 BC through 2000 AD. Where are the big changes in slope of the line? Can you identify them? In this concept, we'll learn what causes them.

What Causes Human Populations to Grow?

Look at the graph above. Human population increased dramatically at certain times. The graph begins 10,000 BC, although you can't really see the line. Population starts to rise perceptibly at around 1800 BC. The numbers begin to rise dramatically about 200 years ago. What causes these changes?

Farming was developed about 10,000 years ago. Farming meant a steady supply of food. People could settle in villages. The rise at around 1800 BC is due to increased farming and the rise of cities and towns. After 1800 AD, population shoots up dramatically. Really dramatically. What happened?

Where the Industrial Revolution was taking place, the human population started to grow really fast. The birth rate was always high. What changed was the death rate. The population grew because more people stayed alive. The death rate fell for several reasons: 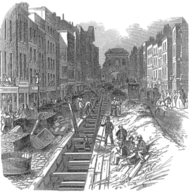 Digging a London sewer (1840s). Before 1800, human wastes were thrown into the streets of cities such as London. In the early 1800s, sewers were dug to carry away the wastes.

The Green Revolution has increased the productivity of farms immensely. A century ago, a single farmer produced enough food for 2.5 people, but now a farmer can feed more than 130 people. The Green Revolution is credited for feeding 1 billion people that would not otherwise have been able to live.

Health care has been improving over the most recent centuries. Vaccines were developed that could prevent many diseases (Figure below). Antibiotics were discovered that could cure most infections caused by bacteria. Together, these two advances saved countless lives.

This child is getting a polio vaccine. She will never get sick with polio, which could save her life or keep her from becoming crippled.