Does the world seem crowded?

In some places, there seem to be people everywhere. Times Square in New York City is definitely one of those places. In other places, there are hardly any people at all. Does that mean that the world is not overpopulated? Is space all that people need?

Growth Rates Around the World

With ample food, better health, and easier work, people live longer. Children are much more likely to reach adulthood and have their own children. In many countries, death rates have gone down dramatically, but birth rates remain high. This means that the population is growing. Pictured below is the growth rates of human populations all over the world (Figure below).

Human ingenuity has allowed the population to continue to grow. We’ve increased Earth's carrying capacity for humans by our ingenuity. We grow crops, trade for needed materials, and design ways to exploit resources that are difficult to get at, such as groundwater. We use long-buried ancient organisms for fuel. We have broken the rules for biological populations. In our effort to escape the confines of the earth's carrying capacity, we may have brought about our own demise.

Of course, there's a flip side to this. For the population to continue to grow, more advances in agriculture will be needed. The best lands are already in use. Most rivers that can be dammed, have been dammed. In many aquifers, groundwater is not replenished on the time frame needed. Fossil fuels too are limited. Obtaining fossil fuels or developing new power sources will be more costly. 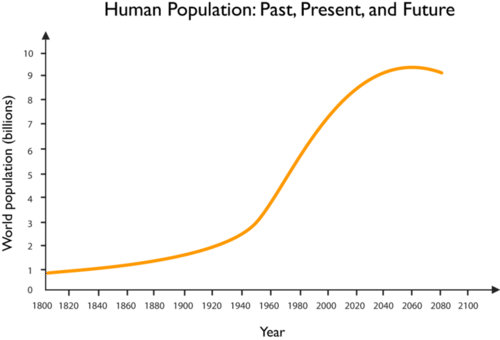 Try to locate on this graph Earth's carrying capacity for humans. Do you think this projection is very accurate or just a guess?