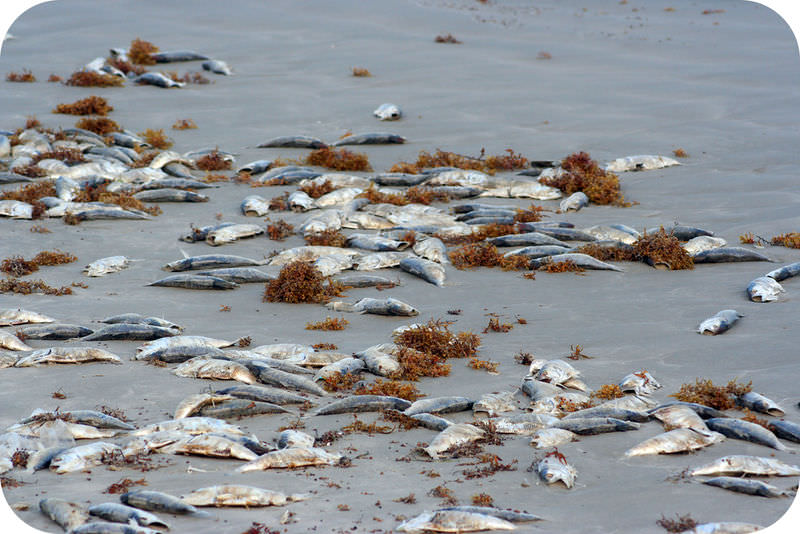 Why are these fish dead?

In a dead zone, there is so little oxygen that fish can't live. What causes the oxygen to disappear? Indirectly, it's nitrogen.

Living things need nitrogen. Nitrogen is a key element in proteins. Like carbon, nitrogen cycles through ecosystems. The nitrogen cycle is pictured below (Figure below). 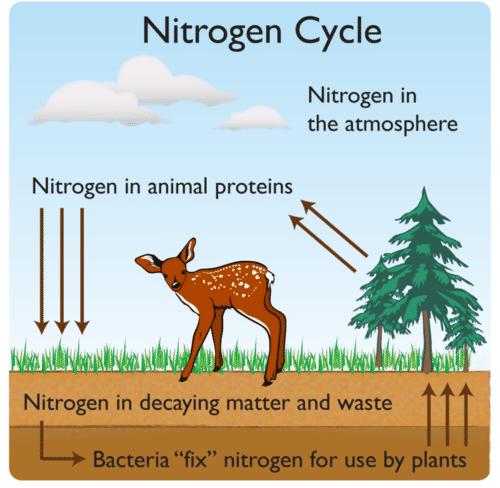 Air is about 78 percent nitrogen. Decomposers release nitrogen into the air from dead organisms and their wastes. However, producers such as plants can’t use these forms of nitrogen. Nitrogen must combine with other elements before producers can use it. This is done by certain bacteria in the soil. It’s called “fixing” nitrogen.

Human Actions and the Nitrogen Cycle

Nitrogen is one of the most important nutrients needed by plants. That’s why most plant fertilizers contain nitrogen. Adding fertilizer to soil allows more plants to grow. As a result, a given amount of land can produce more food. So far, so good. But what happens next?

Rain dissolves fertilizer in the soil. Runoff carries it away. The fertilizer ends up in bodies of water, from ponds to oceans. Nitrogen is a fertilizer in the water. Since there is a lot of nitrogen, it causes algae to grow out of control. Pictured below is a pond covered with algae (Figure below). Algae use up carbon dioxide in the water. After the algae die, decomposers break down the dead tissue. The decomposers use up all the oxygen in the water. This creates a dead zone. A dead zone is an area in a body of water where nothing grows because there is too little oxygen. There is a large dead zone in the Gulf of Mexico (Figure below). The U.S. states outlined on the map have rivers that drain into the Gulf of Mexico. The rivers drain vast agricultural lands. The water carries fertilizer from these areas into the Gulf. 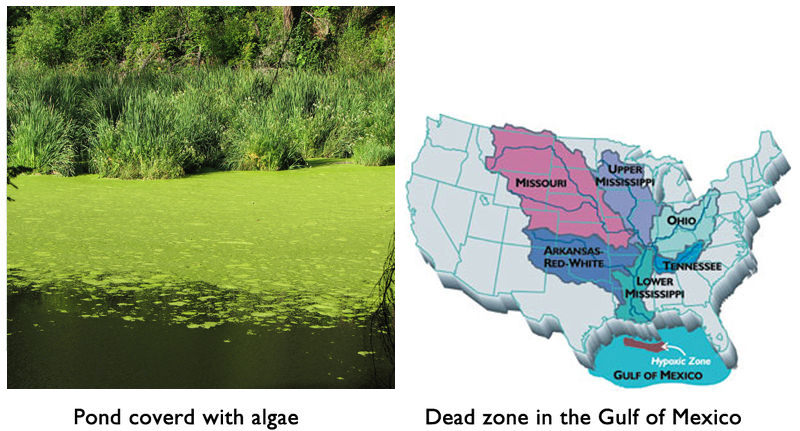 The pond on the left is covered with algae because there is too much nitrogen in the water. The red-shaded area in the map on the right is a dead zone in the Gulf of Mexico. It’s called the hypoxic (“low oxygen”) zone in the figure.

This very thorough video on the nitrogen cycle with an aquatic perspective was created by high school students.