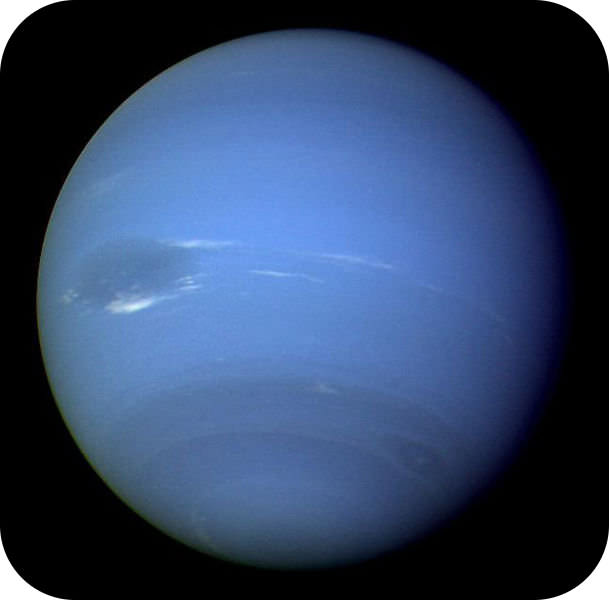 Does this photo give you an idea of how Neptune got its name?

Because of its blue color, Neptune was named for the Roman god of the sea. The blue is not a planetary ocean though!

Neptune (Figure below) is the eighth planet from the Sun. Neptune is so far away you need a telescope to see it from Earth. Neptune is the most distant planet in our solar system. It is nearly 4.5 billion kilometers (2.8 billion miles) from the Sun. One orbit around the Sun takes Neptune 165 Earth years. 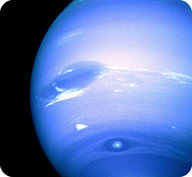 Scientists guessed Neptune's existence before it was discovered. Uranus did not always appear exactly where it should. They said this was because a planet beyond Uranus was pulling on it. This gravitational pull was affecting its orbit. Neptune was discovered in 1846. It was just where scientists predicted it would be!

Uranus and Neptune are often considered “sister planets.” They are very similar to each other. Neptune has slightly more mass than Uranus, but it is slightly smaller in size.

Extremes of Cold and Wind

Like Uranus, Neptune is blue. The blue color is caused by gases in its atmosphere, including methane. Neptune is not a smooth looking ball like Uranus. The planet has a few darker and lighter spots. When Voyager 2 visited Neptune in 1986, there was a large dark-blue spot south of the equator. This spot was called the Great Dark Spot. When the Hubble Space Telescope photographed Neptune in 1994, the Great Dark Spot had disappeared. Another dark spot had appeared north of the equator. Astronomers believe that both of these spots represent gaps in the methane clouds on Neptune.

Neptune's appearance changes due to its turbulent atmosphere. Winds are stronger there than on any other planet in the solar system. Wind speeds can reach 1,100 km/h (700 mph). This is close to the speed of sound! The rapid winds surprised astronomers. This is because Neptune receives little energy from the Sun to power weather systems. It is not surprising that Neptune is one of the coldest places in the solar system. Temperatures at the top of the clouds are about –218°C (–360°F).

Like the other outer planets, Neptune has rings of ice and dust. These rings are much thinner and fainter than Saturn's. Neptune's rings may be unstable. They may change or disappear in a relatively short time.

Neptune has 13 known moons. Only Triton (Figure below) has enough mass to be round. Triton orbits in the direction opposite Neptune's orbit. Scientists think Triton did not form around Neptune. The satellite was captured by Neptune’s gravity as it passed by.