Who are engineers and what do they do? Why are the activities of engineers important? In this section, we will begin to discover some answers to these questions.

Capture your ideas by making a list of your answers to the questions above, or by drawing a picture of the engineer that you are imagining. When you are finished share your drawing or list with someone else. How are your lists or pictures similar? How are they different?

As we progress though the chapter, we will check to see if your ideas change.

Profile 1. Ashley is in charge of product development and support for a large electronics product company in the Pacific Northwest. She manages two engineering teams. She is 39 years old and likes living in the Pacific Northwest because of the outdoor activities such as hiking and camping. The members of her engineering teams live in other cities and most of them live outside the United States in countries that include India, China, Sri Lanka, and Malaysia. Each location has some particular engineering advantage. For example, the United States is the best place to design products and manage product development and support; India has a very good system to support technology development and it is less expensive to develop software there; China was selected as the best place to manufacture computer chips; and Malaysia and Sri Lanka were selected to manufacture and assemble the rest of the products. One of Ashley’s projects might include developing components that will be part of a satellite antenna system such as this one at the Cryptologic Operations Center in Misawa, Japan.

Most days Ashley works out of her home. Because her engineering team members are located all over the world, she must be available to communicate with them 24 hours a day or whenever a problem arises. To aid this global communication, Ashley’s computer sounds a bell any time one of her team members sends important email or needs to talk with her directly. Since she is available 24 hours a day, her daily routine is very flexible. Ashley can usually choose her own work schedule, except when she has scheduled meetings or urgent communication demands, which might be only two or three times each week. Sometimes she spends the morning working in her garden after handling some of her morning communication (the bell also rings outside), and she also takes a break to paint most afternoons. Ashley travels to each of the team member locations one or two times each year.

Ashley’s most important tools are her computer and her mobile phone. She has excellent communication skills and knows how to relate to the different cultures of her team members. Ashley also has a broad knowledge of electronic product systems. Although she is not an expert in any of the individual components, she understands how each of the components works together (Figure above).

Ashley was in college for four and one-half years studying for her engineering degree. She spent the first year at a community college before transferring to a university. Ashley liked math in high school but did not settle on an engineering major until she was in her junior year of college and had to use math to analyze and design an electronics project. Her favorite courses were those that explained how electronic devices worked. Ashley earned $90,000 in 2006.

Profile 2. Tyson loved cars and motorcycles since he was very young; he began working on them while he was still too young to drive. His dream has always been to design cars and motorcycles. When he graduated from high school he found that his high school grades, and especially his math background, were not good enough to be admitted to a university engineering program. He worked while taking evening courses at a community college for two years before transferring into a university engineering program. Tyson found his physics courses interesting, but struggled with math. Tyson studied engineering for another four years before he graduated with an engineering degree. In school, he learned that there were very few job opportunities to actually design cars and motorcycles. However, Tyson had done a senior project using a rapid prototyping (RP) machine. The RP machine could automatically build almost any part that Tyson could design on a computer. He learned to create many different types of part designs on the computer using what is called computer-aided design (CAD) software. With this software Tyson could make dimensional drawings, and he spent many extra hours in the lab designing and using the RP machine to make his designs (Figure below). After graduation, he took a job in Texas with a rapid prototyping company. Soon Tyson found that the rapid prototyping technology could be used to make expensive specialty parts, and he began working with motorcycle designers in Italy and Spain. He also found a NASCAR racing team that needed custom parts and worked with their designers. 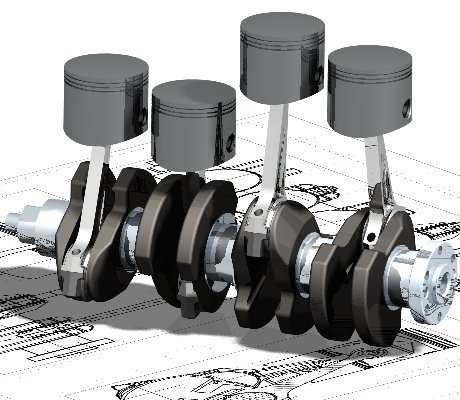 This piston assembly was designed using CAD software similar to the one Tyson used.

After eight years, Tyson decided to start his own company designing and producing high-end custom motorcycle and car parts. He now lives in California and owns two sports cars and a motorcycle. Tyson, 43, earned $285,000 in 2006. He travels out of town and out of the country two or three times a month. His most important tools are his computer that has very good CAD software and his mobile communication system. Tyson enjoys listening to his music collection while he works.

Profile 3. Raji’s childhood dream was to be a dolphin trainer. She really loved biology and chemistry classes in high school, but was undecided about her college major. A guest speaker in her high school biology class described how engineers were combining biology and technology to develop new technologies that could one day help blind people see; the speaker encouraged Raji to consider an engineering career. With her good grades, she received a college scholarship that paid for her tuition, room and board. Raji earned a bioengineering degree in four years, and her favorite courses were those that included time in the bioengineering labs. In her junior year of college, because of her good grades and careful lab work, she received an invitation to work with a team of students and professors on a research project designing prosthetic limbs for amputees (Figure above). Raji found that she really liked research. After graduating with a bachelor’s degree, she decided to go to graduate school for a PhD. Raji, now 28, will complete her PhD degree next year and hopes to work for a bioengineering company as a research engineer. She has also considered teaching at a university. Raji likes to ski and plans to begin scuba diving. Maybe Raji will finally get to swim with the dolphins.

Profile 4. Xaio grew up in Taiwan and studied many hours every day while in high school so he would be accepted into a regional college. He was very interested in how computers work and wanted to learn to design them, so he studied computer engineering in college. Xaio knew that he would be able to find a job when he finished school, but most of the jobs for computer engineers in his home region did not pay as well as similar jobs in other countries. In fact, some of the job opportunities in other countries paid more money in one year than Xaio’s family made in ten years. However, such a high paying job would require a master’s degree from a good school in another country, and that would be expensive. Xaio applied to schools in the United States and in Great Britain and was accepted to a good school in the United States, where he finished a master’s degree in computer engineering in two years. Xaio has been working for an electronics design company in the United States for five years. Because of his knowledge of Taiwanese culture and language, and his knowledge of electronics design, the design company trained him in microelectronics manufacturing and testing. Now Xaio is a team leader for manufacturing some of the company’s designs that are being made in Taiwan (Figure above). He travels to Taiwan about four times a year. His hobbies include tennis and ballroom dancing. Xaio made $85,000 in 2006.

Profile 5. Glenn had many interests growing up; he played on a soccer team for several years, and played trumpet in his grade school and junior high bands. In high school, he was good at math and science, but he also enjoyed playing trumpet in the marching band and competing on the swim team. As a junior in high school, he had a very difficult time deciding what his college major should be; he liked many different things, and was not sure which he wanted to pursue. Several of his teachers suggested that he consider engineering, and after visits to several colleges, he decided electrical engineering appealed to him. He started as a college freshman in electrical engineering. One year later, he decided that mechanical engineering was a better fit for his interests; he switched to mechanical engineering and graduated with a B+ grade average three and one-half years later.

After graduation, he was hired by a large aerospace company whose primary business is Department of Defense contracts. The company provided a one-year training period in which he rotated through several different divisions of the company and became familiar with the different product lines within the company. Now he works as a member of a large team updating engine and transmission designs for a military helicopter. He enjoys the technical challenges of his job. He plans to improve his technical expertise by starting a masters program in the next few years. He believes that this will help him move into a team leadership position.

Engineering Is Diverse and Global

Hopefully, you have noticed that engineers are as diverse as the types of careers they pursue. They are women and men, young and old. They are consultants, teachers, and technical sales representatives. They work for small companies and large companies. Many start their own companies. They work in industrial plants and research labs. Some engineers work in an office; some work in production and manufacturing facilities; others spend most of their time working outdoors. And some engineers do a great deal of travel.

Engineers need a college degree, and many choose to acquire advanced specialization by pursuing a master’s or PhD degree. Others choose to pursue an engineering degree because it provides them with both a solid technical background and strong critical thinking skills that support them in other fields such as law, medicine, business, and public service.

You may have also noticed that engineers can make a good income, that they often work in teams, and that those teams are composed of people from around the world. In the past ten years engineering has become a global career.

(For this exercise you need access to the Internet or a library.) Approximately 75,000 students graduated from engineering colleges in the United States following the 2005–2006 academic year. See if you can find out how many engineering graduates there were from other countries. Which countries have the most engineering graduates? Can you guess why?