Who Is the Client or Customer for the Designed Artifact

There are many types of societal issues which extend beyond the borders of any single state or country that will impact the quality of many people’s lives in the future. However, in order to address a given global issue, it has to be reconfigured into a local issue, whether it is at the city, county, state, region, or national level. Then local action can be taken to address a local problem, which then contributes to the solution of the global range of the problem. For example, for the issue of Drought in the Southwest, a way to address this as a local problem might be given by the question, “How can water be conserved in the city of Phoenix?” Thus, the design process for a product designated for the public good requires consideration of the scope of implementation. For example, will the designed artifact or process address an audience of one person or many people? Do they live locally on the block or in the town, or regionally in the county or state or contiguous states or possibly nationally or internationally one. These issues will be considered in the exercise below.

Activity—Who is client or sponsor for a designed societal issue solution?

Select three or four topic from the list of global issues in Table 1 in the What Is the Role of Science and Mathematics in Engineering? section that interest you. Describe and write down who the clients or customers might be for the three or four issues you selected.

The design process begins when a client or customer has a problem or need and wants a designed solution resulting in a product that meets the need or solves the problem. Sometimes, a new product is developed from scratch which would require a new design and sometimes innovations are used to improve existing products, in which case some aspects of an already existed design would be modified. New products generally use an open-ended process that rarely has a single correct solution. Instead, there are several solutions that will satisfy desired needs with varying degrees of effectiveness. In this section, we will indicate how each step of the design process is connected to math and science. One of the challenges of design is to choose from a number of possible solutions. However, a clearly defined process flow is needed so that designs are developed to meet the needs of customer or client. We will demonstrate how math and science connect to engineering in the engineering design process with a simplified example to facilitate understanding. The process is usually iterative but a single cycle will be used here since the goal is to show the math and science connection to engineering (Figure below). Briefly stated, the streamlined steps in the design process might consist of the following: 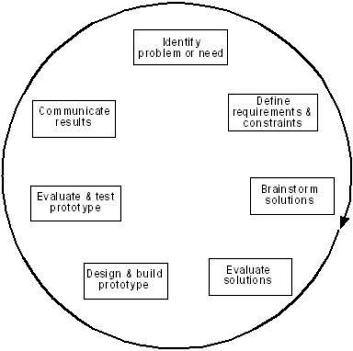 Case Study—Water for a Small, Isolated Seaside Village in an Underdeveloped Country

Let us say that there is a small village of 50 people living in a tropical climate at the desert’s edge by the sea and named Ecologia. It is connected to the next small village 150 miles away by a poor one-lane road that is sometimes impassable due to dust storms and bad repair. The town lives by fishing from the ocean and by farming a small patch of vegetables, but does have a few gasoline-powered generators to supply some electricity to the village. It is located in the underdeveloped country of Optimicia which does not have the resources to supply utilities such as electricity, water, and communication to the town. A single well has supplied water to the town, but the water level is dropping and it may go dry. The village would like to have another means of supply of water to supplement the current supply and assure sufficient quantities for the future.

Identify the Problem. An isolated village next to the ocean with 50 lower income people has no connection to government supported utilities, the nearest town 150 miles away on a poor road, and the village’s deep well water source that is being depleted. A new source of water is needed.

Science connection. A civil engineer might use an instrument to monitor the well water level to measure the rate of depletion of water.

Math connection. Mathematics could be used to develop a model for cost and availability of current water sources (wells, monsoons, and trucked in water).

Define Requirements and Constraints. Requirements might include the purity of the water, the rate at which water is produced, the lifetime required from a designed system, and the fact that, since the village is off the electrical distribution grid, no utilities are available to support the system. Constraints might include various cost limitations such as for design, fabrication, operation, and maintenance of the system, as well as possible safety and environmental considerations. From the sets of requirements and constraints, as well as consideration of the context of the situation with the village, people, and environment, a problem statement could be developed and might read as follows: “A system for producing drinkable water will be developed which will supply the needs of 50 people such that the cost is no greater than $2 per thousand gallons, including materials, construction, and operation over a period of 10 years.”

Science connection. A knowledge of the science underlying the various existing techniques is necessary so that the widest range of approaches to providing water is explored.

Math connection. Mathematical models may be used here to examine water costs for different systems so that a reasonable set of requirements and constraints are used in generating the problem statement. There are mathematical models that describe costs for existing techniques, but new models would need to be created if a new technology was devised.

Brainstorm Alternative Solutions. At this stage of the process the widest variety of ideas and/or possible solutions needs to be explored for the design problem. These ideas can come from many different sources: existing products, brainstormed ideas, ideas from scientific principles, and any other approaches possible. The body of these possibilities, or design concepts, needs to then be shaped into a component, system or process that could fulfill the set of requirements and constraints as possible problem solutions. Some approaches may be thrown out early if they have little potential (e.g., supplying pure water from icebergs to a village near the equator is probably not feasible).

Science connection. A variety of solutions could be generated based on scientific principles as shown with the following examples. Sea water can be purified by freezing, but this is not a good approach for a village near the equator. Purifying sea water by distillation (evaporation and condensation) could be used in a solar still or in a flash evaporation plant. Purifying seawater by removing salt with a membrane could be done with a reverse osmosis plant. Moving pure water to the town by new wells, by truck or by pipeline are other possible solutions without much science.

Math connection. Mathematical models to roughly estimate costs for the various approaches could be generated in the first portion of this step of the design process. They are also used to predict a cost for various alternative solutions that arise during idea generation phase and can help analyze the linkage between the science behind a technique and the cost of implementing it with materials, fabrication or manufacturing, operation, and maintenance. These costs then need to be normalized for the sake of comparison with other options to cost per thousand gallons of water.

Evaluate Solutions. Potential designs are evaluated relative to the constraints and criteria, and one or more are selected to be designed in detail and prototyped. The selection is made using a structured process that requires the requirements be met and chooses the best design according to the requirements and constraints. To continue to show math and science connections it will be assumed that the best design was a solar still for desalination. Using that choice other design steps will now be considered.

Design and Build Prototype. The selected design is developed in full detail and components' specific shapes and dimensions determined. Materials are selected and components are fabricated and prototype assembled. Prototype operation and performance may be modeled on a computer. For the hypothetical design a prototype solar still is built.

Science connection. A more detailed knowledge of the science can be created with more accurate values of physical parameters which will also provide information that may affect various costs for the components of the prototype. The nature of the physical phenomena that are occurring within various components should be modeled from the viewpoint of the science-based ideal so that performance can be evaluated when the prototype is tested.

Math connection. Mathematical models of performance based on science phenomena will be generated to evaluate the prototype.

Test and Evaluate prototype. Prototypes are tested to see if the design meets all requirements and performs acceptably. The performance should be compared to the ideal performance determined from mathematical modeling of the prototype. Differences between the ideal and real performance should be analyzed and understood. The design process may be iterated and refined to improve performance until it is acceptable. Sometimes, testing and evaluation show that a design will not work, so that a different design concept must be selected by returning to evaluate alternative solutions. If the hypothetical solar still meets performance specifications and fulfills constraints then solution can be communicated

Science connection. The scientific model of operation should approximate the actual prototype performance; if not, then there may be science phenomena not correctly implemented in the model or there may be other issues in construction or operation that needs to be diagnosed to have a model that is a good predictor of performance.

Math connection. The mathematical model of operation should be tested to make certain that the model has been constructed properly using the appropriate science and mathematics.

Communicate results. The activities and results of the design process should be documented and communicated to the appropriate client or customer.

Select one issue of your choice from the list of global issues in Table 1 of the What Is the Role of Science and Mathematics in Engineering? section. Specify and write down the problem scenario that describes the people and their situation who are the clients who will benefit from your design problem solution for the chosen Societal Issue. Now explain and write down what types of engineers are needed for the project team that will be working on the Societal Issue. Now, as was demonstrated for the Case Study previously, describe and write down for each step in the Simplified Design Process what is happening for the chosen Societal Issue along with what math and science is being used and how it is being used.