Understanding the Nature of Culture

Cultures are part of the human social experience. They are comparable to ice-cream flavors, each tends to be sweet and desirable while still having a vast variety of ingredients and textures. Yet, even though cultures tend to be universal and desirable, we often judge cultures as being "good, bad, or evil," with our own culture typically being judged good. We have to consider our perspective when engaging people from different cultures. Are we ethnocentric or culturally relativistic? Also before traveling consider your own values and stereotypes. A Stereotype is a broad generalization about groups based solely on the group affiliation. Although it will be discussed more in the Race chapter, stereotypes have to be managed, especially among ethnocentric persons.

Culture is the shared values, norms, symbols, language, objects, and way of life that is passed on from one generation to the next. Culture is what we learn from our parents, family, friends, peers, and schools. It is shared, not biologically determined. In other words, you are only born with drives, not culture.

Values are defined standards of what is good, bad, desirable, or undesirable for ourselves and others. Typical American values—considered for the entire nation and described by Williams, 1970 were: achievement and success; equality; individualism; racism and group superiority; activity and work ; education; efficiency and practicality; religiosity; progress; romantic love/monogamy; science and technology; equal opportunity; material comfort; nationalism/patriotism; humanitarianism; external conformity; freedom; and democracy and free enterprise (see Williams, R. M. (1970). American Society: A Sociological Interpretation, 3rd Ed. NY; Knopf). Do these collective values apply to your own personal values? It helps to do your homework about your country and your own personal values before you experience another culture.

Regardless of which culture a person grows up in, there are cultural universals which are for the most part common to all cultures. Cultural Universals are certain aspects of cultures which are found among peoples of all cultures throughout the world. All societies have universal social tasks which include the meeting of basic human needs such as breathing, eating, sleeping, drinking, having sex, and remaining safe. These universals include: adapting to and coping with physical environment; assigning of roles; controlling reproduction and relations between the sexes; communicating; maintaining some form of authorized government; and socializing children. 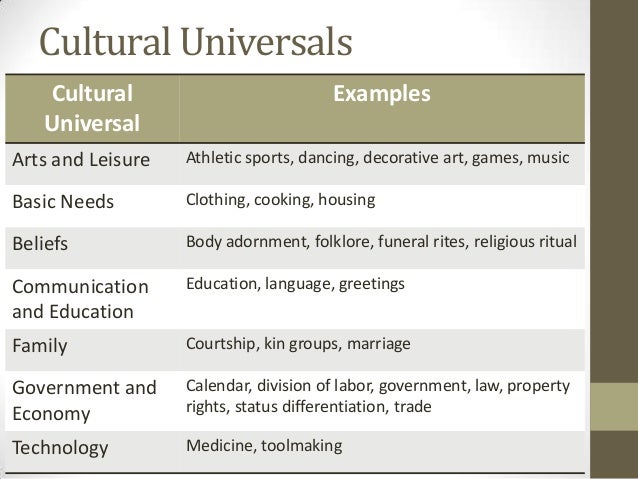 Key Point: You should never, ever be required to forfeit your own values in the pursuit of teachability, cultural relativism, and skilled cross-cultural relationships. If the typical US culture is more like your world-taken-for-granted and you travel to an equatorial country where they behave in a different manner, then your enthusiastic hand shaking, personal questioning, and space intrusions might land you in hot water (see Table 5 below). It’s best not to assume that a polite American also makes a polite Costa Rican and vice versa.

Ethnocentrism is the tendency to judge others based on our own experiences. In this perspective our culture is right while cultures which differ from our own are wrong. The fact of cultural diversity raises some important but difficult questions of ethnocentrism and cultural relativism. Ethnocentrism, the opposite view, refers to the tendency to judge another culture by the standards of our own and to the belief that our own culture is indeed superior to another culture. When we think of cow worship in India, it is easy to be amused by it and even to make fun of it. That is why anthropologist Marvin Harris’s analysis was so important, because it suggests that cow worship is in fact very important for the Indian way of life. Culture Shock is the disoriented feeling which occurs in the context of being in a new culture. It tends to leave over a few days or weeks and the greater the familiarity with the culture the less the shock

Another more valuable and helpful perspective about differing cultures is the perspective called Cultural Relativism, or the tendency to look for the cultural context in which differences in cultures occur. Cultural relativism refers to the belief that we should not judge any culture as superior or inferior to another culture. In this view, all cultures have their benefits and disadvantages, and we should not automatically assume that our own culture is better and “their” culture is worse. Cultural relativists like all the ice-cream flavors, if you will. They respect and appreciate cultural differences even if only from the spectators’ point of view. They tend to be teachable, child-like, and open-minded. They tend to enjoy or learn to enjoy the many varieties of the human experience.

An ethnocentric thinks on the level of carrot soup: peel carrots, and water, and boil. The cultural relativist tends to think on the level of a complex stew: peel and prepare carrots, potatoes, onions, mushrooms, broth, tofu, and 10 secret herbs and spices and simmer for 2 hours. The diversity of the human experience is what makes it rich and flavorful.

But, do cultural relativists have to accept all versions of morality, ethics, values, and traditions in order to be teachable? No, of course not. Anyone who is planning a trip to another community, state, or country would be wise to do their cultural homework and prepare in advance how they will immerse themselves into the parts of the culture that fit their value system. Always do your cultural homework before you travel even if you are just spending time across the state for a day. Remember that your best cultural skills may be antagonistic to those from other cultures.

A subculture refers to a group that shares the central values and beliefs of the larger culture but still retains certain values, beliefs, and norms that make it distinct from the larger culture. A good example of a U.S. subculture is the Amish, who live primarily in central Pennsylvania and parts of Ohio and shun electricity and other modern conveniences, including cars, tractors, and telephones. Their way of life is increasingly threatened by the expansion of non-Amish businesses and residences into Amish territory (Rifkin, 2009).Rifkin, G. (2009, January 8). The Amish flock from farms to small businesses. The New York Times, p. B3. Since the 1970s, development has cost Lancaster County, Pennsylvania—where many Amish live—thousands of acres of farming land. Some Amish families have moved to other states or left farming to start small businesses, where some do use cell phones and computers. Despite these concessions to modern development, for the most part the Amish live the way they always have. Most still do not drive cars or even ride bikes. The case of the Amish dramatically illustrates the persistence of an old-fashioned subculture and its uneasy fit with the larger, dominant culture.