Being able to identify the smallest and largest values of a function (extrema), and where they occur in some interval on the domain or over the entire domain, is useful in graphing a function equation as well as in solving “optimization” problems. The location of these extrema is tied to the behavior of the derivative. You learned in prior work with quadratic functions (parabolas, \( y=ax^2+bx+c \nonumber\)), that the least or greatest value of the parabola could be found at the vertex of the parabola (on the axis of symmetry \( x=− \frac{b}{2a} \nonumber\)).  How are the derivative of the quadratic function and the vertex \( x=− \frac{b}{2a} \nonumber\) related?

Let’s start our discussion with some formal working definitions of the maximum and minimum values of a function.

The values of the function for these x-values are called extreme values or extrema.

Here is an example of a function that has a maximum at x=a and a minimum at x=d:

Observe the graph at x=b. While we do not have a minimum at x=b, we note that f(b)≤f(x) for all x near b. We say that the function has a local minimum at x=b.

Similarly, we say that the function has a local maximum at x=c since f(c)≥f(x) for some x contained in open intervals of c.

Remember to use the terms maximum and minimum (without including the term local) only when you are talking about the absolute or global extrema values of the function; local extrema or relative extrema should be called local maximum or local minimum.

Do all functions have a maximum and minimum? Yes, all continuous functions do. This is stated by the Extreme Value Theorem that we discussed in the concept on Continuity.

Extreme Value Theorem: If a function f(x) is continuous in a closed interval I, then f(x) has both a maximum value and a minimum value in I.

This makes sense conceptually. Try drawing a function (on a closed interval, including the endpoints) so that no point is at the highest part of the graph. No matter how the function is sketched, there will be at least one point that is highest.

How do extreme values, maxima and minima, relate to derivatives? The French mathematician Fermat shows how in Fermat's Theorem: If f(c) is an extreme value of f for some open interval containing c, then either f′(c)=0, or f′(c)  does not exist.

Summary so far: If a function is continuous in a closed interval, it has both a minimum and a maximum at some location(s), and the derivative at these locations is either 0 or does not exist. The locations are called critical points. Let’s consider the two functions shown below and say something about them in the closed interval [-2, 2]. Notice that g(x) (the second function) has a cusp at x=0. It should be noted that the converse of the Extreme Value Theorem is not necessarily true, i.e., just because f′(x)=0 at some location x=a, the function value f(a) does not have to be a local minimum or maximum. Earlier, you were asked to determine how the derivative of the quadratic function \( (y=ax^2+bx+c) \nonumber\) and the vertex formula  \( x=− \frac{b}{2a} \nonumber\) are related.

If you realized that the vertex of the quadratic function is also the location where the slope of the tangent line, and therefore the derivative, equals 0 you made a great observation. \( \frac{dy}{dx}=2ax+b=0 \nonumber\) means that \( x=− \frac{b}{2a} \nonumber\). This is the x-value of the vertex, and a critical value or point of the function.

Notice that f′(x) is undefined at the two locations x=±5, which means these are critical points. Both of the values are associated with function values f(±5)=0.

For #1-3, identify the absolute and local minimum and maximum values of the function (if they exist); find the extrema. (Units on the axes indicate1 unit). 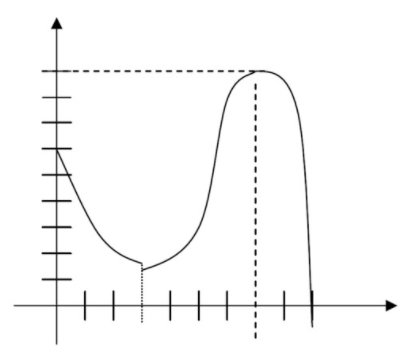 For #4–6, find the extrema and sketch the graph.

To see the Review answers, open this PDF file and look for section 4.2.