Exponential growth is one of the most powerful forces in nature.  A famous legend states that the inventor of chess was asked to state his own reward from the king.  The man asked for a single grain of rice for the first square of the chessboard, two grains of rice for the second square and four grains of rice for the third.  He asked for the entire 64 squares to be filled in this way and that would be his reward.  Did the man ask for too little, or too much?

Radioactive isotopes like Carbon 14 have something called a half-life that indicates how long it takes for half of the molecules present to decay into other more stable molecules.  It takes about 5,730 years for this process to occur which is how scientists can date artifacts of ancient humans.

Let's say a mummified animal is found preserved on the slopes of an ice covered mountain.  After testing, you see that exactly one fourth of the carbon-14 has yet to decay and you want to find out how long ago was this animal alive. How would you do that?

Since this problem does not give specific amounts of carbon, it can be inferred that the time will not depend on the specific amounts.  One technique that makes the problem easier to work with could be to create an example scenario that fits the one fourth ratio.  Suppose 60 units were present when the animal was alive at time zero.  This means that 15 units must be present today.

The second equation yields \(a=60\) and then the first equation becomes:

Now, suppose you invested $100 the day you were born and it grew by 6% every year until you were 100 years old.  How would you use an exponential function to determine how much would this investment be worth then?

After a century, there will be almost $34,000 in the account. Interest has greatly increased the $100 initial investment.

Earlier you were asked if the man asked for too little or too much rice if he gets one grain for the first square, two grains for the second, four grains for the third and so on. The number of grains of rice on the last square, the 64th square, would be almost ten quintillion (million million million).  That is more rice than is produced in the world in an entire year.

Suppose forty rabbits are released on an island.  The rabbits mate once every four months and produce up to 4 offspring who also produce more offspring four months later.  Estimate the number of rabbits on the island in 3 years if their population grows exponentially.  Assume half the population is female.

Even though parts of this problem are unrealistic, it serves to illustrate how quickly exponential growth works. Forty is the initial amount so \(a=40\). At the end of the first 4 month period 20 female rabbits could have their litters and up to 80 newborn rabbits could be born. The population has grown from 40 to 120 which means tripled. Thus, \(b=3\). The last thing to remember is that the time period is in 4 month periods. Three years must be 9 periods. 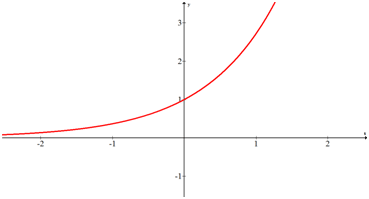 Analyze in this context means to define all the characteristics of a function.

Identify which of the following functions are exponential functions and which are not.

d. \(y=x^{x}\) Not an exponential function because \(x\) is both the base and power of the exponent. 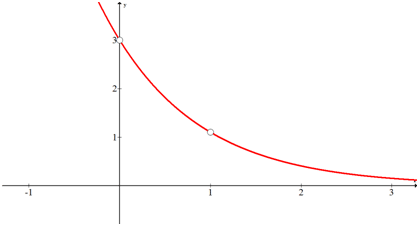 1. Explain what makes a function an exponential function.  What does its equation look like?

2. Is the domain for all exponential functions all real numbers?

3. How can you tell from its equation whether or not the graph of an exponential function will be increasing?

4. How can you tell from its equation whether or not the graph of an exponential function will be decreasing?

5. What type of asymptotes do exponential functions have?  Explain.

Write the exponential function that passes through the following points.