There are two types of parametric equations that are typical in real life situations. The first is

circular motion as was described in the concept problem. The second is projectile motion.

Next, it is important to note the starting point, center point and direction. You should already

have the graphs of sine and cosine memorized so that when you see a pattern in words or as a graph, you can identify what you see as \(+\sin ,-\sin ,+\cos ,-\cos\).

Take the example given above with the Ferris Wheel that starts at a low point of 6 feet off the ground, spins counterclockwise to a height of 46 feet off the ground, then goes back down to 6 feet in 60 seconds. The the vertical component starts at a low point of 6 , travels to a middle point of 26 and then a height of 46 and back down. This is a - cos pattern. The amplitude of the \(-\cos\) is 20 and the vertical shift is 26 . Lastly, the period is 60 . You can use the period to help you find \(b\).

Thus the vertical parameterization is:

Thus parametric equations for the point on the wheel are:

\(y=\) functions respectively or the horizontal and vertical parameterization. 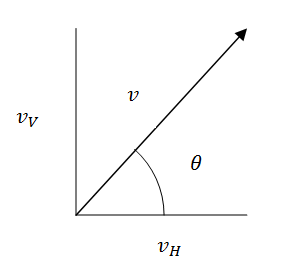 If an object is launched from the origin at a velocity of \(v\) then it has horizontal and vertical components that can be found using basic trigonometry.

The horizontal component is basically finished. The only adjustments that would have to be made are if the starting location is not at the origin, wind is added or if the projectile travels to the left instead of the right. See Example A.

The vertical component also needs to include gravity and the starting height. The general

equation for the vertical component is:

The constant \(g\) represents gravity, \(t\) represents time, \(v\) represents initial velocity and \(k\) represents starting height. You will explore this equation further in calculus and physics. Note that in this concept, most answers will be found and confirmed using technology such as your graphing calculator.

A ball is thrown from the point (30,5) at an angle of \(\frac{4 \pi}{9}\) to the left at an initial velocity of \(68 \mathrm{ft} / \mathrm{s}\). Model the position of the ball over time using parametric equations. Use your graphing calculator to graph your equations for the first four seconds while the ball is in the air.

o find when the function reaches its maximum, you can find the vertex of the parabola. Analytically this is messy because of the decimal coefficients in the quadratic. Use your calculator to approximate the maximum after you have graphed it. Depending on how small you make your \(T_{\text {step }}\) should find the maximum height to be about 75 feet.

To find out when the ball hits the ground, you can set the vertical component equal to zero and solve the quadratic equation. You can also use the table feature on your calculator to determine when the graph goes from having a positive vertical value to a negative vertical value. The benefit for using the table is that it simultaneously tells you the \(x\) value of the zero.

Kieran is on a Ferris wheel and his position is modeled by the parametric equations:

This question is designed to demonstrate the power of your calculator. If you simply model the two equations simultaneously and ignore time you will see several points of intersection. This graph is shown below on the left. These intersection points are not interesting because they represent where Kieran and the ball are at the same place but at different moments in time.

When the \(T_{m a x}\) is adjusted to 2.3 so that each graph represents the time from 0 to 2.3 , you get a better sense that at about 2.3 seconds the two points are close. This graph is shown above on the right.

You can now use your calculator to help you determine if the distance between Kieran and the ball actually does go below 3 feet. Start by plotting the ball's position in your calculator as

Depending on how accurate your \(T_{\text {step }}\) is, you should find that the distance is below 3 feet. Kieran does indeed catch the ball.

At what velocity does a football need to be thrown at a \(45^{\circ}\) angle in order to make it all the way across a football field?

You can solve this system many different ways.

Nikki got on a Ferris wheel ten seconds ago. She started 2 feet off the ground at the lowest point of the wheel and will make a complete cycle in four minutes. The ride reaches a maximum height of 98 feet and spins clockwise. Write parametric equations that model Nikki’s position over time. Where will Nikki be three minutes from now?

clockwise to a maximum height of 103 feet, making a complete cycle in 5 minutes.

1. Write a set of parametric equations to model Candice's position.

2. Where will Candice be in two minutes?

3. Where will Candice be in four minutes?

One minute ago Guillermo got on a Ferris wheel at its lowest point, 3 feet off the ground. The

Ferris wheel spins clockwise to a maximum height of 83 feet, making a complete cycle in 6

4. Write a set of parametric equations to model Guillermo's position.

5. Where will Guillermo be in two minutes?

6. Where will Guillermo be in four minutes?

7. Write a set of parametric equations to model the position of the ball.

9. How far does the ball get before it lands?

10. Write a set of parametric equations to model the position of the ball.

12. How far does the ball get before it lands?

towards Kristy who is at the origin. Suppose Kristy also throws a football towards Riley at 65

13. Write a set of parametric equations to model the position of Riley's ball.

14. Write a set of parametric equations to model the position of Kristy's ball.

15. Graph both functions and explain how you know that the footballs don't collide even though the two graphs intersect.