Applications of the Normal Distribution

The normal distribution is the foundation for statistical inference and will be an essential part of many of those topics in later chapters. In the meantime, this section will cover some of the types of questions that can be answered using the properties of a normal distribution. The first examples deal with more theoretical questions that will help you master basic understandings and computational skills, while the later problems will provide examples with real data, or at least a real context.

If you understand the relationship between the area under a density curve and mean, standard deviation, and z-scores, you should be able to solve problems in which you are provided all but one of these values and are asked to calculate the remaining value. In the last lesson, we found the probability that a variable is within a particular range, or the area under a density curve within that range. What if you are asked to find a value that gives a particular probability?

Given the normally-distributed random variable X, with μ=35 and σ=7.4, what is the value of X where the probability of experiencing a value less than it is 80%?

As suggested before, it is important and helpful to sketch the distribution.

If we had to estimate an actual value first, we know from the Empirical Rule that about 84% of the data is below one standard deviation to the right of the mean.

Therefore, we expect the answer to be slightly below this value.

When we were given a value of the variable and were asked to find the percentage or probability, we used a z-table or the 'normalcdf(' command on a graphing calculator. But how do we find a value given the percentage? Again, the table has its limitations in this case, and graphing calculators and computer software are much more convenient and accurate. The command on the TI-83/84 calculator is 'invNorm('. You may have seen it already in the DISTR menu. The syntax for this command is as follows:

'InvNorm(percentage or probability to the left, mean, standard deviation)'

Make sure to enter the values in the correct order, such as in the example below: To solve this problem, first draw a sketch:

Remember that about 95% of the data is within 2 standard deviations of the mean. This would leave 2.5% of the data in the lower tail, so our 5% value must be less than 9 units from the mean.

Because we do not know the mean, we have to use the standard normal curve and calculate a z-score using the 'invNorm(' command. The result, −1.645, confirms the prediction that the value is less than 2 standard deviations from the mean. Now, plug in the known quantities into the z-score formula and solve for μ as follows: Again, let’s first look at a sketch of the distribution.

Again, the first step to see if our prediction is right is to use 'invNorm(' to calculate the z-score. Remember that since we are not entering a mean or standard deviation, the result is based on the assumption that μ=0 and σ=1. Now, use the z-score formula and solve for σ as follows: Technology Note: Drawing a Distribution on the TI-83/84 Calculator

The TI-83/84 calculator will draw a distribution for you, but before doing so, we need to set an appropriate window (see screen below) and delete or turn off any functions or plots. Let’s use the last example and draw the shaded region below 94 under a normal curve with μ=83 and σ=8.583. Remember from the Empirical Rule that we probably want to show about 3 standard deviations away from 83 in either direction. If we use 9 as an estimate for σ, then we should open our window 27 units above and below 83. The y settings can be a bit tricky, but with a little practice, you will get used to determining the maximum percentage of area near the mean. The reason that we went below the x-axis is to leave room for the text, as you will see.

Now, press [2ND][DISTR] and arrow over to the DRAW menu.

Enter the values shown in the following screenshot: Next, press [ENTER] to see the result. It should appear as follows: Technology Note: The 'normalpdf(' Command on the TI-83/84 Calculator

You may have noticed that the first option in the DISTR menu is 'normalpdf(', which stands for a normal probability density function. It is the option you used in lesson 5.1 to draw the graph of a normal distribution. Many students wonder what this function is for and occasionally even use it by mistake to calculate what they think are cumulative probabilities, but this function is actually the mathematical formula for drawing a normal distribution. You can find this formula in the resources at the end of the lesson if you are interested. The numbers this function returns are not really useful to us statistically. The primary purpose for this function is to draw the normal curve.

To do this, first be sure to turn off any plots and clear out any functions. Then press [Y=], insert 'normalpdf(', enter 'X', and close the parentheses as shown. Because we did not specify a mean and standard deviation, the standard normal curve will be drawn. Finally, enter the following window settings, which are necessary to fit most of the curve on the screen (think about the Empirical Rule when deciding on settings), and press [GRAPH]. The normal curve below should appear on your screen.

The foundation of performing experiments by collecting surveys and samples is most often based on the normal distribution, as you will learn in greater detail in later chapters. Here are two examples to get you started.

The Information Centre of the National Health Service in Britain collects and publishes a great deal of information and statistics on health issues affecting the population. One such comprehensive data set tracks information about the health of children1. According to its statistics, in 2006, the mean height of 12-year-old boys was 152.9 cm, with a standard deviation estimate of approximately 8.5 cm. (These are not the exact figures for the population, and in later chapters, we will learn how they are calculated and how accurate they may be, but for now, we will assume that they are a reasonable estimate of the true parameters.)

If 12-year-old Cecil is 158 cm, approximately what percentage of all 12-year-old boys in Britain is he taller than?

We first must assume that the height of 12-year-old boys in Britain is normally distributed, and this seems like a reasonable assumption to make. As always, draw a sketch and estimate a reasonable answer prior to calculating the percentage. In this case, let’s use the calculator to sketch the distribution and the shading. First decide on an appropriate window that includes about 3 standard deviations on either side of the mean. In this case, 3 standard deviations is about 25.5 cm, so add and subtract this value to/from the mean to find the horizontal extremes. Then enter the appropriate 'ShadeNorm(' command as shown:

How tall would Cecil need to be in order to be in the top 1% of all 12-year-old boys in Britain?

Here is a sketch:

In this case, we are given the percentage, so we need to use the 'invNorm(' command as shown. 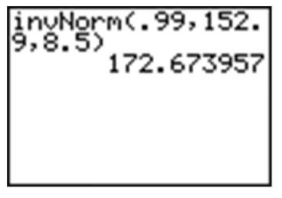 Our results indicate that Cecil would need to be about 173 cm tall to be in the top 1% of 12-year-old boys in Britain.

Suppose that the distribution of the masses of female marine iguanas in Puerto Villamil in the Galapagos Islands is approximately normal, with a mean mass of 950 g and a standard deviation of 325 g. There are very few young marine iguanas in the populated areas of the islands, because feral cats tend to kill them. How rare is it that we would find a female marine iguana with a mass less than 400 g in this area?

It helps to draw a picture of the situation:

Using a graphing calculator, we can approximate the probability of a female marine iguana being less than 400 grams as follows: With a probability of approximately 0.045, or only about 5%, we could say it is rather unlikely that we would find an iguana this small.

To view the Review answers, open this PDF file and look for section 5.3.