Linear correlation is the simplest type of relationship between two variables. Your calculator has the power to use a variety of different function families to find other relationships and create many different types of models. How do you choose which function family is best for a given situation?

Once you understand how to do linear regression with your calculator, you already know the technical mechanics to perform other regressions in the [STAT] [CALC] menu. The most common regressions correspond to the function families.

When you perform these types of regressions, it will be incredibly important for you to interpret and explain parts of the graph. Here are some points to keep in mind:

In general, at this point you should use your best judgment when choosing a function family to model a given set of data and deciding how good a fit the model is based on context.

Take the following data about SAT scores and number of hours slept the night before.

Let x be the number of hours slept and y be the SAT score.

After plotting the points, you should choose a function family to use as a model. In this case, it would be appropriate to try a quadratic relationship. 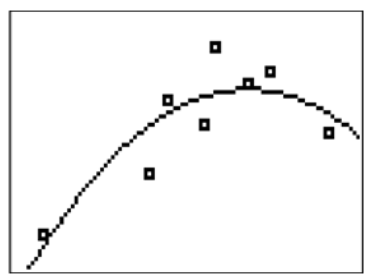 A quadratic model makes sense because there seems to be a peak in the model and in the data around 8.5 hours of sleep. It makes sense that someone who does not get enough sleep will do worse and someone who gets too much sleep might also do worse.

From the regression model, we can answer the following questions: 2. Calculate the score you are predicted to get if you get 5 hours of sleep. 3. What is the relevant domain of the model?

4. The average SAT score is about 1500. According to the model, what amount of sleep predicts this score? Does this number represent the average number of hours that people sleep before the SATs? When using the model in this direction, the results do not make as much sense and you need to be extremely careful about what you say.

5. Compare the actual and predicted score for someone with 6 hours of sleep.

Earlier, you were asked how to decide which function family to use for the a given situation. For some data sets it is possible to use a polynomial or other complicated shape to exactly intersect every data point. The downside is that the model will miss the overall relationship. Consider the following data and modeling a linear relationship or cubic relationship. Use your knowledge of function families to predict the best model for each of the following scatterplots.

The following data represents the height of an elephant over time. Determine the best regression function to use and determine its equation.

Logistic is the best function family because it levels off over time indicating that the elephant ceases to grow once it matures.

The following data represents the speed that Ben can kick a soccer ball at different ages. Determine the best regression function to use and determine its equation.

What are two weaknesses and two strengths of the model used to predict Ben’s kicking speed from Example 4.

One strength is that a quadratic model correctly describes the peak of kicking speed occurring in the middle of Ben’s life. A linear regression might forecast Ben’s kicking speed increasing forever and a logistic regression might forecast Ben’s kicking speed always staying fast despite his old age. A second strength of the model could be the y-intercept of 0.6191. Even though this number is not really in the relevant domain, it implies that as a newborn baby Ben could kick the ball very slowly which is arguably true.

A second weakness of the model is that it predicts negative speed at either age extreme which doesn’t make sense. A better model would be flat at 0 when Ben is born and also at the end of Ben’s life when he is no longer able to kick the ball.

The table below shows the average height of an American female by age.

2. Which function is a better fit for this data? Why?

3. Use both equations to predict the y-intercepts. What does the y-intercept represent in each case? Are your predictions reasonable for this part of the graph?

4. Use your “better fit” equation to predict the height of a 70 year-old woman. Is your prediction reasonable for this part of the graph? Why or why not? What do you really need your model to do for the domain [16,100]?

Alice is in Wonderland and drinks a potion that approximately halves her height for each sip she takes, as shown in the table below.

5. Do an exponential regression to determine an appropriate model. What is the equation?

6. Explain why exponential regression is a good choice in this case.

7. How many sips did she take if she is 2 inches tall?

A rumor is spreading around your 400 person school. The following table shows the number of people who know the rumor each day.

9. Use logistic regression to determine an equation that models the number of people who know the rumor over time.

10. Why is the logistic model appropriate in this case?

11. Use your regression equation to predict the time when only one person knew the rumor. Does this make sense?

12. Choose the function family that is the best model for this situation and determine the regression equation.

13. Use your regression equation to predict the depth of the water at 10 hours. What is the difference between the actual depth from the data and the predicted depth from your equation (residual)?

15. Why might statisticians do modeling with regression for their data?

To see the Review answers, open this PDF file and look for section 15.8.