What is a fact?

Science is different from other ways of thinking. It is based on facts. Gravity is a fact. If you let go of a ball, it will fall to the ground. Can you tell a fact from an opinion? Can you tell when an idea follows logically from a fact? Basing ideas on facts is essential to good science.

Science is a set of facts, and it is also a set of explanations that are based on those facts. Science relies on facts to explain the natural world.

Scientists usually begin an investigation with facts. A fact is a bit of information that is true. Facts come from data collected from observations. Facts can also come from experiments that have been run. Data is factual information that results from an investigation. Facts and data are not subject to opinion or bias. An opinion is someone's subjective view or position on a subject.

What is a fact? Look at the following list. Identify if the statement is (1) a fact (from observation or prior experiments), (2) an opinion, or (3) a combination. 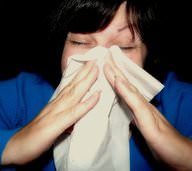 Can you be sure from the photo that Susan has a cold?

The following is an analysis of the statements above:

Global average annual temperatures are rising. This graph shows temperature anomaly relative to the 1951-1980 average (the average is made to be 0). The green bars show uncertainty.