Do Earth scientists work in the field?

Yes! Many geologists do field work to better understand Earth. Many others go on field trips to learn about certain types of geology. In Glacier National Park, a geologist could learn about mountain building. They could learn about how glaciers modify landscapes. He could take photos to assist him in teaching a class. He could just have a great time in a geologically fascinating area!

Many Earth scientists collect data in the field, called field work. The data may be from observations or measurements. The scientists may create a geological map of the area. They might write detailed descriptions of the rocks and their relationships. They may collect samples to analyze in the lab. They may do a combination of all of these! Earth science laboratories contain high-tech equipment. That equipment can reveal the chemistry or age of a rock sample. Geologists do field work to look for resources. They may study a region for environmental cleanup. There are many other reasons for going in the field. One common reason is just to understand the region better.

To really understand geology and some of the other branches of Earth science, it's best to go out in the field! Geology students in many colleges and universities go on a lot of field trips. Some of the concepts presented in this text can be illustrated by features seen in the field. Where possible, photos are provided to illustrate concepts. So we can get some of the benefit of going on a field trip! Some of the places that are featured in this text are described below. 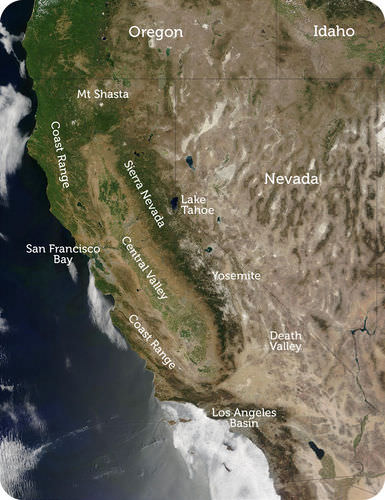 California has a lot of different environments and a complex geologic history. California is a great place to study geology!

In the satellite image above (Figure above), it is possible to identify the major geographic (physical) features of California.

East of the image of California is Nevada. Very different from California, Nevada is extremely arid. The Basin and Range province consists of a set of mountains and valleys. You can see the ranges as dark brown rocky regions and the valleys as lighter brown. 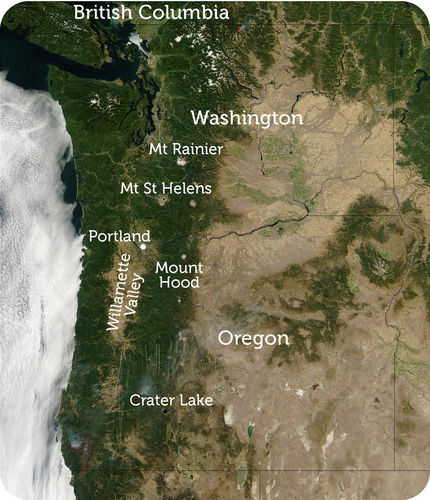 North of California along the Pacific Coast is Oregon, Washington, and then British Columbia in Canada. This region is similar to California in having a coastal range, a central valley (at least in part of Oregon), and very arid lands east of the high Cascades mountains.

The Cascades are a chain of volcanoes that run through Oregon and Washington, and into British Columbia (Figure above). Some of them are easily spotted on this image as white spots in the midst of the green forests of the Cascades Range. 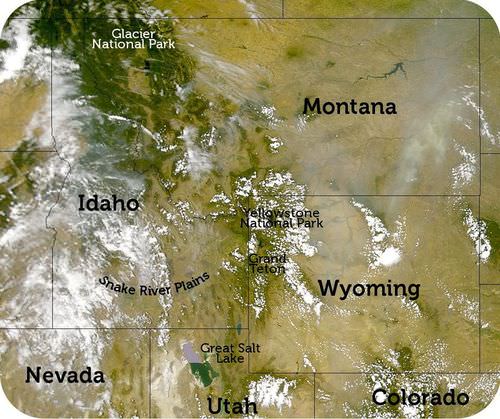 This image shows the states of Idaho, Montana, and Wyoming. The northern part of Idaho and northwestern Montana is mountainous and forested. Arid lands lie to the east.

The states of Idaho, Montana, and Wyoming are located east of the Pacific Northwest. The landscape ranges from mountainous forests to deserts (Figure above). 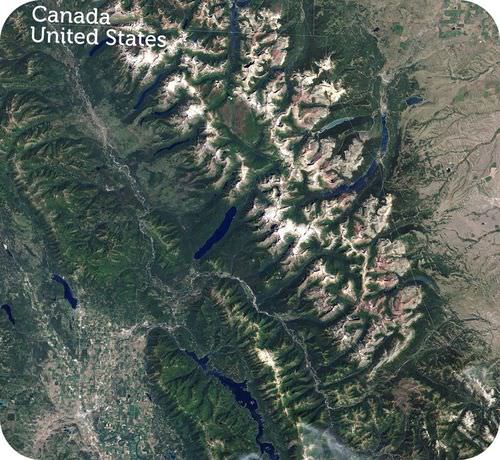 This satellite image of Glacier National Park in the summer shows snow-capped peaks and glacial valleys, many of which are now lakes. 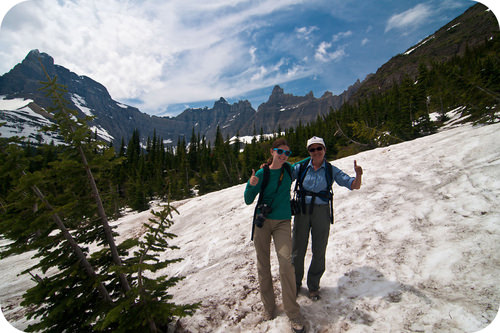 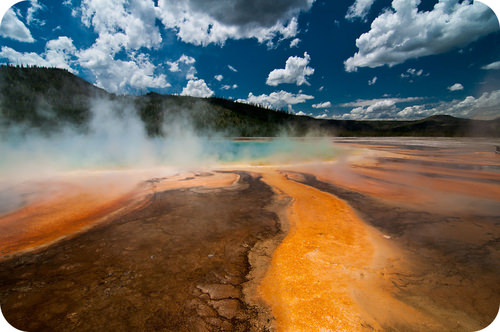 Grand Prismatic Spring is one of the spectacular features of Yellowstone National Park.

Yellowstone National Park (Figure above) is in the northwestern corner of Wyoming. Yellowstone is best known for its incredible geysers. The park also has gorgeous mountain scenery and fantastic wildlife, including herds of bison (Figure below). The best known feature is Old Faithful. This geyser is not the highest, largest, or most beautiful, but it is the most reliable. 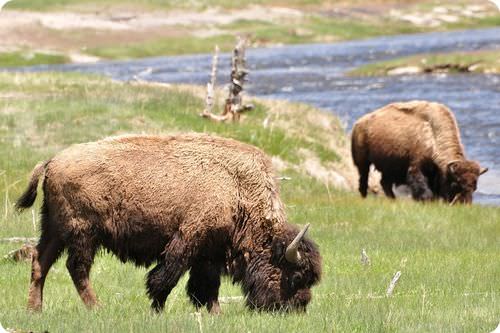 Bison are just some of the amazing creatures that roam around Yellowstone. 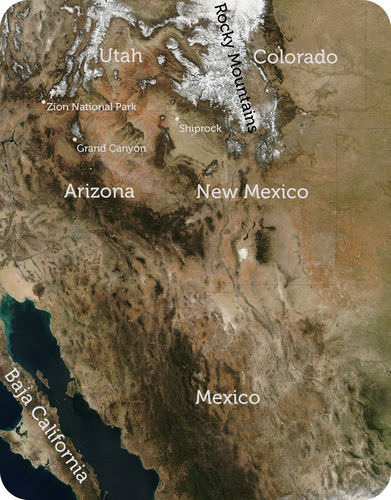 The Southwest is home to mountains, canyons, valleys, and flat lands. Many features discussed in the concepts presented in this text can be seen in the Southwest.

The Southwestern United States (Figure above) is a great place to study geology. The region is so arid that in most locations rocks and structures are easily seen. In several concepts we will visit parts of the Southwest to view geology in the field. 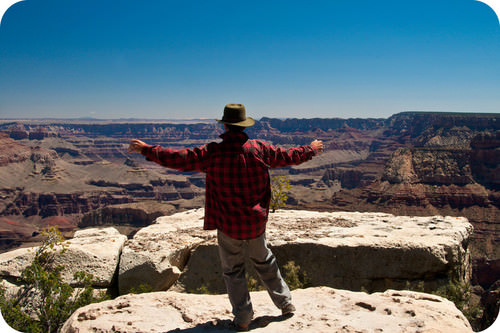 From the rim, the Grand Canyon gives a sense of the vastness of geologic time and the immensity of the planet.

Geologists say that the Grand Canyon (Figure above) has "layer cake geology." This is because the rock strata are in layers. They are extremely easy to see. Sedimentary rocks are like a book that tells the story of the environment in which they formed. Rock units can be traced across large expanses. Looking down into the Grand Canyon, you get a sense of the vastness of space and of time. 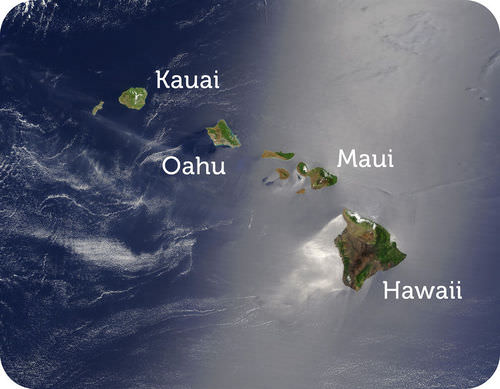 The Hawaiian Islands from space.

The Hawaiian Islands (Figure above) are in the central Pacific Ocean. The islands are volcanoes that increase in age from southeast to northwest. The youngest island is the Big Island of Hawaii at the southeast end of the chain. The volcanoes get older through Maui, Kahoolawe, Lanai, Molokai, Oahu, Kauai, and Niihau Islands through the northwest. The Kilauea volcano on Hawaii has been erupting almost continuously since 1983. There are also eruptions at an underwater volcano called Loihi seamount. Loihi is the youngest volcano. Hawaii is a fantastic place to see volcanic eruptions and features.