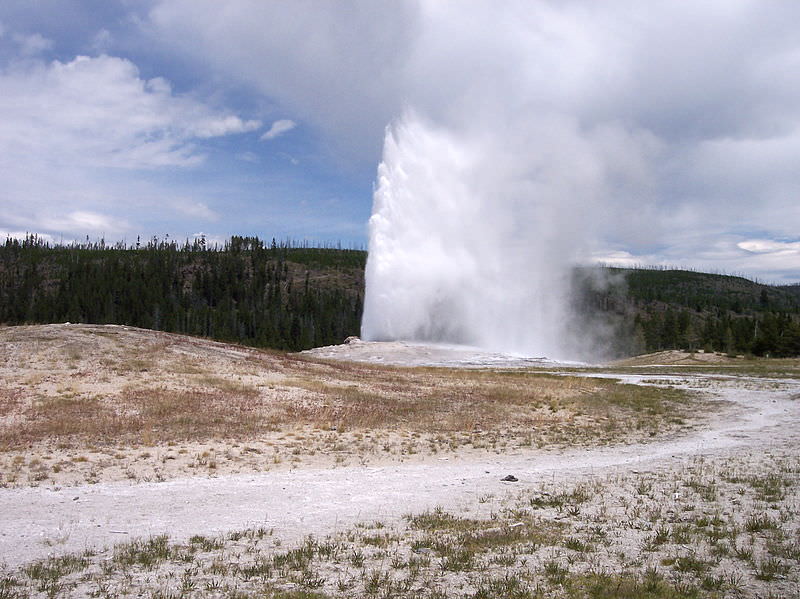 How could you locate this feature?

Geologists, hikers, and many other people need to be able to say where they are. Or where they want to go. They need to be able to mark a location on a map. The opening photo is of Old Faithful Geyser in Yellowstone National Park. It is located at 44°30'N and 110°150'W. Let’s explore what that means.

Most maps use a grid of lines to help you to find your location. This grid system is called a geographic coordinate system. Using this system you can define your location by two numbers, latitude and longitude. Both numbers are angles between your location, the center of Earth, and a reference line (Figure below).

Lines of latitude start with the Equator. Lines of longitude begin at the prime meridian.

Lines of latitude and longitude form convenient reference points on a map.

You can remember latitude and longitude by doing jumping jacks. When your hands are above your head and your feet are together, say longitude (your body is long!). When you put your arms out to the side horizontally, say latitude (your head and arms make a cross, like the “t” in latitude). While you are jumping, your arms are going the same way as each of these grid lines: horizontal for latitude and vertical for longitude.

Using Latitude and Longitude on a Map

If you know the latitude and longitude of a place, you can find it on a map. Simply place one finger on the latitude on the vertical axis of the map. Place your other finger on the longitude along the horizontal axis of the map. Move your fingers along the latitude and longitude lines until they meet. For example, say the location you want to find is at 30°N and 90°W. Place your right finger along 30°N at the right of the map. Place your left finger along the bottom at 90°W. Move your fingers along the lines until they meet. Your location should be near New Orleans, Louisiana, along the Gulf coast of the United States. Now can you locate Old Faithful, 44°30'N and 110°150'W, on a map?

In order to get latitude, longitude, and elevation you need several instruments. What if you could do the same thing with only one instrument? A Global Positioning System (GPS) receiver is all that is needed to locate your position on the Earth’s surface in many places.

(a) You need a GPS receiver to use the GPS system. (b) It takes signals from four GPS satellites to find your location precisely on the surface.

You can use a GPS meter to tell you how to get to Old Faithful.