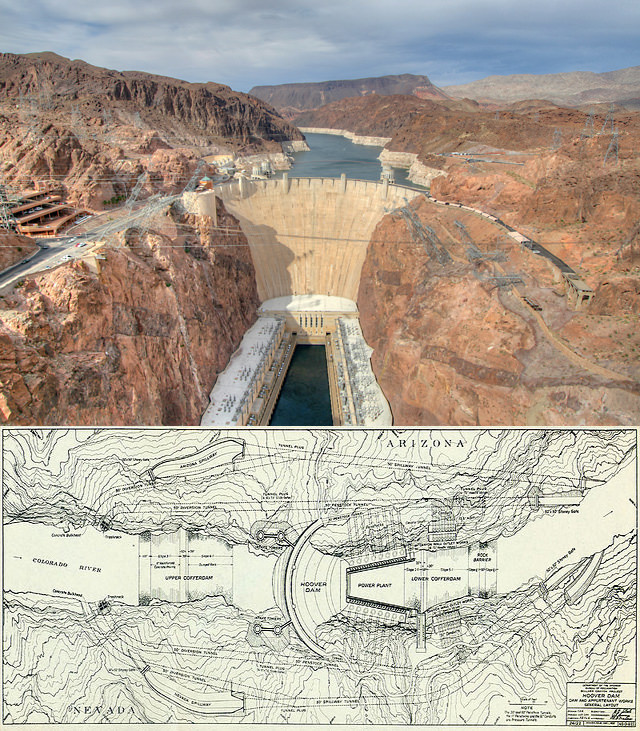 Can a map help you understand a place even if you've never been there?

Hills, streams, valleys, and snowfields all show up on some types of maps. With practice, people can look at a topographic map and see what the landscape is really like. Of course, it's not the same as being there! But a topographic map can give you a good feel for an area before you go. It can also help you to identify features once you are there. What does this map tell you about the region? Can you identify features that appear in the photo on the map?

How does a topographic map tell you about the terrain? Let’s consider the following principles:

Look at the topographic map of Stowe, Vermont (Figure below). There is a steep hill rising just to the right of the city of Stowe. You can tell this because the contour lines there are closely spaced. The contour lines also show that the hill has a sharp rise of about 200 feet. Then the slope becomes less steep toward the right. 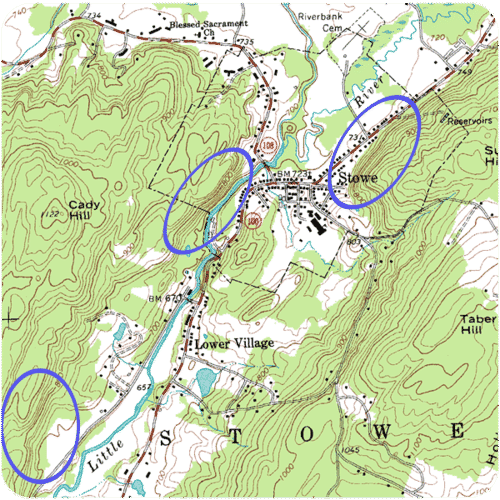 Portion of a USGS topographic map of Stowe, VT.

2. Concentric circles indicate a hill. Pictured below is another side of the topographic map of Stowe, Vermont (Figure below). When contour lines form closed loops, there is a hill. The smallest loops are the higher elevations on the hill. The larger loops encircling the smaller loops are downhill. If you look at the map, you can see Cady Hill in the lower left and another, smaller hill in the upper right. 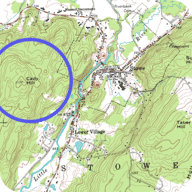 3. Hatched concentric circles indicate a depression. The hatch marks are short, perpendicular lines inside the circle. The innermost hatched circle represents the deepest part of the depression (Figure below). The outer hatched circles represent higher elevations. 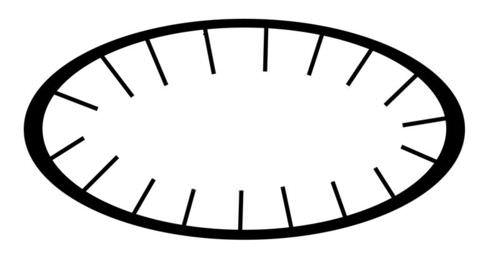 On a contour map, a circle with inward hatches indicates a depression.

4. V-shaped portions of contour lines indicate stream valleys. The “V“ shape of the contour lines point uphill. There is a V shape because the stream channel passes through the point of the V. The open end of the V represents the downstream portion. A blue line indicates that there is water running through the valley. If there is not a blue line, the V pattern indicates which way water flows. Below, you can see examples of V-shaped markings (Figure below). Try to find the direction a stream flows. 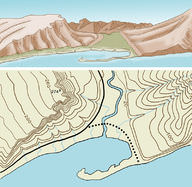 Illustrations of three-dimensional ground configurations (top) and corresponding topographic map (bottom). Note that the V-shaped markings on the topographic maps correspond to drainage channels. Also, the closely-spaced contour lines denote the rapid rising cliff face on the left side.

Including contour lines, contour intervals, circles, and V-shapes allows a topographic map to show three-dimensional information on a flat piece of paper. A topographic map gives us a good idea of the shape of the land.

A geologic map shows the different rocks that are exposed at the surface of a region. The geology is often put on a contour map. Rock units are shown in a color identified in a key. On the geologic map of the Grand Canyon, for example, different rock types are shown in different colors. Some people call the Grand Canyon “layer cake geology“ because most of the rock units are in layers. Rock units show up on both sides of a stream valley.

A portion of the geologic map of the Grand Canyon, Arizona.