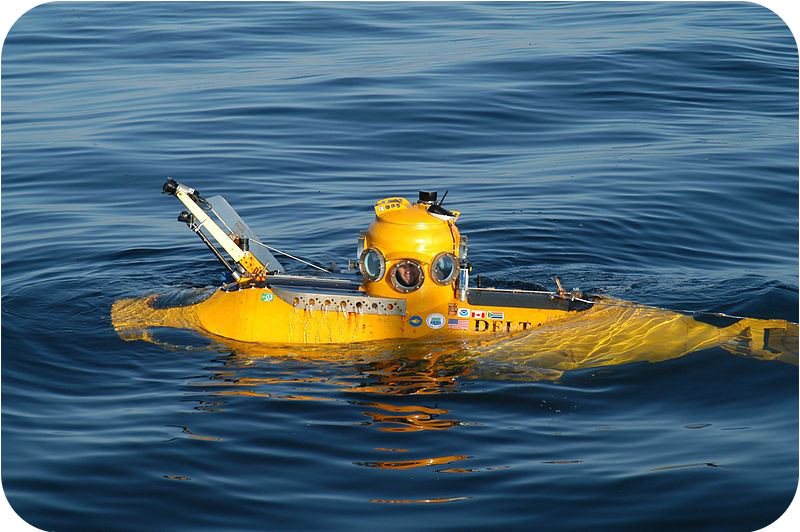 Is it true that we know more about the dark side of the Moon than we do about the oceans?

It's true! Why do you think so? The oceans are deep, dark, and frigid. All but the very top surface is under extraordinarily high pressure. It's hard to imagine an environment that's less hospitable to human life! Yet, as you will see, we know quite a bit about the oceans. This is due mostly to technology. Rovers, like the one pictured above, allow scientists to remotely visit places that are too inhospitable for human life.

Scuba divers can only dive to about 40 meters. When they dive deep, they cannot stay down for very long. Therefore, scuba divers can only observe the organisms and ecosystems very near a coast. Most oceanic research requires accessing greater depths.

How do scientists create bathymetric maps? Early explorers mapped the seafloor by painstakingly dropping a line over the side of a ship. They measured the length of the line when it touched bottom. With this method, they could measure the depth, one tiny spot at a time. During World War II, battleships and submarines carried echo sounders. Echo sounders were developed to locate enemy submarines. Early echo sounders had a single beam. The beam bounced off the nearest object and then returned to the ship. Scientists know the speed of sound in seawater. They can then calculate the distance to the object based on the time it takes for the wave to make a round trip. This allowed them to create a line of depth measurements. Modern echo sounders produce sound waves that travel outward in all directions (Figure below).

This echo sounder has many beams and creates a three dimensional map of the seafloor.

Topographic maps that show water depths are called bathymetric maps. An example of one is pictured below (Figure below). Bathymetric maps can represent any body of water, including lakes and oceans. On these maps, the contour lines represent depth below the surface. Therefore, high numbers are deeper depths and low numbers are shallow depths.

Bathymetric maps are made from depth soundings or sonar data. They help oceanographers understand the shape of bottoms of lakes, bays, and the ocean. This information also helps boaters navigate safely. 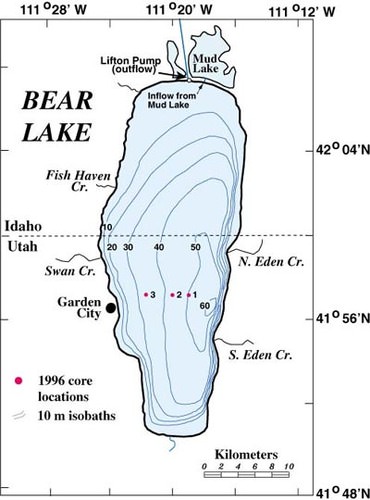 Scientists need to sample seawater (or lake water) from different depths. To sample seawater, bottles are placed along a cable at regular depths (Figure below). When they are in position, a weight is dropped down the cable. This closes the bottles. The water trapped in the bottle can be analyzed in a laboratory. This allows scientists to understand ocean or lake chemistry. 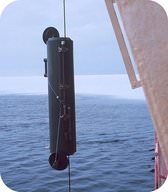 A Niskin bottle being deployed off the side of a research ship.

Samples of seawater and rocks can be collected directly by scientists in a submersible. These subs can take scientists down to make observations. The subs have arms for collecting samples. The human operated vehicle, Alvin can dive up to 4,500 meters beneath the ocean surface and has made more than 5,000 dives since 1964 (Figure below). 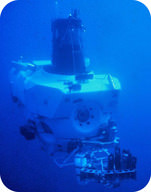 Alvin allows two people and a pilot to make a nine hour dive.

Sending humans to the seafloor is expensive and dangerous. Having to return humans safely to the surface limits what a mission can do. Remotely operated vehicles, or ROVs, allow scientists to study the deep without going to the seafloor. These small vehicles carry cameras and scientific instruments. ROVs were used to study inside the Titanic. This would have been far too dangerous for a manned sub to enter. Scientists control ROVs electronically with sophisticated operating systems.