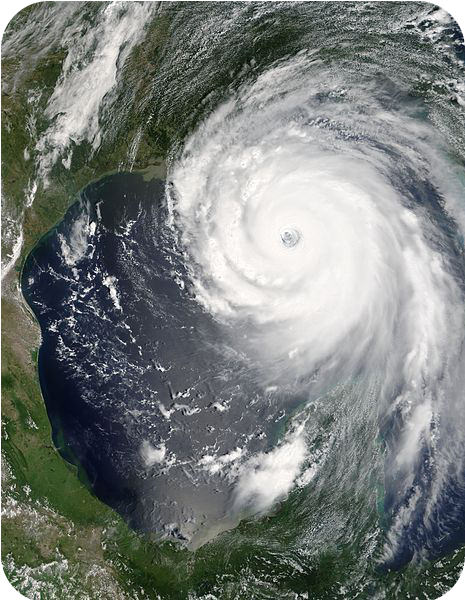 Why are satellites important?

In 1900, a category 4 hurricane devastated Galveston, Texas. It claimed the lives of between 6,000 and 12,000 people. By contrast, the death toll from Hurricane Katrina was about 1,800 people. Why the difference? Although Hurricane Katrina (and Harvey and Maria and others) was a modern tragedy, it would have been much worse without the advance warning of many weather satellites.

Humans did not reach space until the second half of the 20th century. They needed to somehow break past Earth's gravity. A rocket moves rapidly in one direction. The device is propelled by particles flying out of it at high speed in the other direction.

Rockets were used for centuries in wars and for fireworks before anyone could explain how they worked. In 1687 Sir Isaac Newton developed his Laws of Motion. The third law says: To every action there is an equal and opposite reaction. In other words, when a rocket's propulsion pushes in one direction, the rocket moves in the opposite direction (Figure below). 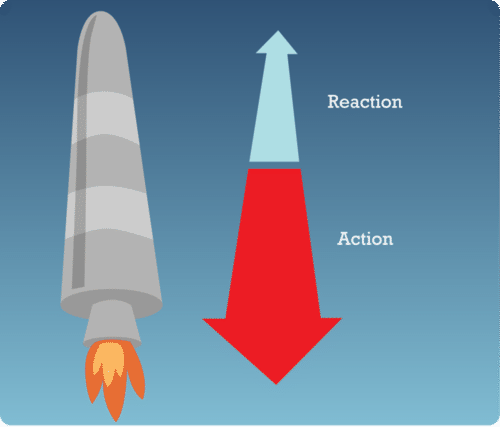 A rocket pushes in one direction so that it moves in the opposite direction.

For a long time, many people believed that a rocket wouldn’t work in space. There would be nothing for the rocket to push against. But they do work! Fuel is ignited in a chamber. The gases in the chamber explode. The explosion creates pressure that forces the gases out of one side of the rocket. The rocket moves in the opposite direction (Figure below). The force pushing the rocket is called thrust. 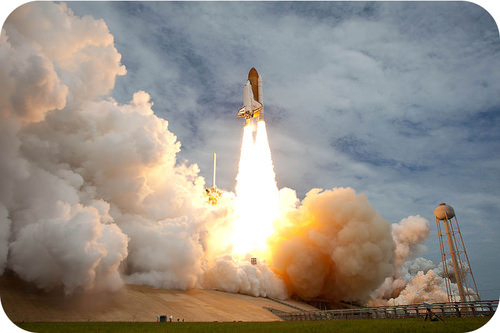 This Space Shuttle launch shows how the thrust of the rocket pushes the shuttle upward into the sky.

For centuries, rockets were powered by gunpowder or other solid fuels. These rockets could travel only short distances. Around the turn of the 20th century, liquid fuel rockets were developed. Liquid fuel gave the rockets enough power to escape Earth’s gravity. By using multiple stages, empty fuel containers could drop away. This reduced the mass of the rocket so that it could fly higher.

How a Satellite Stays in Orbit

Newton’s law of universal gravitation describes how an object can orbit a planet. Every object in the Universe is attracted to every other object by gravity. Gravity also keeps you from floating away into the sky. Why doesn't gravity cause satellites to crash into Earth? 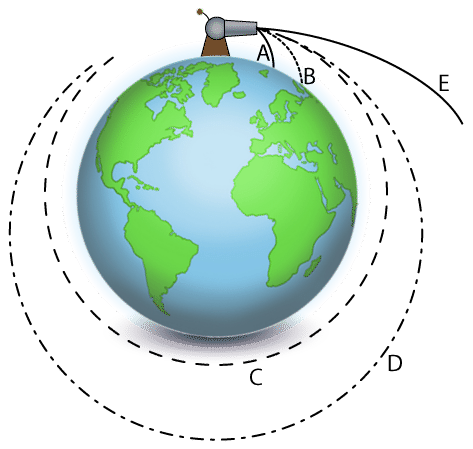 Isaac Newton explained how a cannonball fired from a high point with enough speed could orbit Earth.

Satellites may be placed so that they orbit at the same rate the Earth spins. The satellite then remains over the same location on the surface. Communications satellites are often placed in these orbits.

Humans have a presence in space at the International Space Station (ISS) (Figure below). Modern space stations are constructed piece by piece to create a modular system. The primary purpose of the ISS is scientific research, especially in medicine, biology, and physics.

A photograph of the International Space Station was taken from the space shuttle Atlantis in June 2007.

Craft designed for human spaceflight, like the Apollo missions, were very successful. They were also very expensive and could not carry much cargo. They could be used only once. To outfit the ISS, NASA needed a space vehicle that was reusable. It needed to be able to carry large pieces of equipment. The cargo might include satellites, space telescopes, or sections of a space station. The resulting spacecraft is called a space shuttle (Figure below).

Atlantis on the launch pad in 2006. Since 1981, the space shuttle has been the United States’ primary vehicle for carrying people and large equipment into space.

A space shuttle has three main parts. The part you are probably most familiar with is the orbiter. The orbiter has wings like an airplane. When a space shuttle launches, the orbiter is attached to a huge fuel tank that contains liquid fuel. On the sides of the fuel tank are two large "booster rockets." All of this is needed to get the orbiter out of Earth’s atmosphere. Once in space, the orbiter can be used to release equipment (such as a satellite or supplies for the International Space Station). It can be used to repair existing equipment, such as the Hubble Space Telescope. Astronauts can even do experiments directly on board the orbiter.

When the mission is complete, the orbiter re-enters Earth’s atmosphere. The craft flies back to Earth more like a glider than an airplane. The Space Shuttle program did 135 missions between 1981 and 2011, when the remaining shuttles were retired. Since the space shuttles have retired, the ISS is serviced by Russian Soyuz spacecraft.

You can visit the retired shuttles around the country:

Science Friday: How A LEGO Shuttle Got To Space

How would you get a LEGO shuttle to space? In this video by Science Friday, Raul Oaida, 18-years-old, attached a LEGO shuttle, a video camera and a GPS tracker, to a huge helium balloon and sent them into space. The shuttle reached an altitude of 115,000 feet before heading back to Earth.