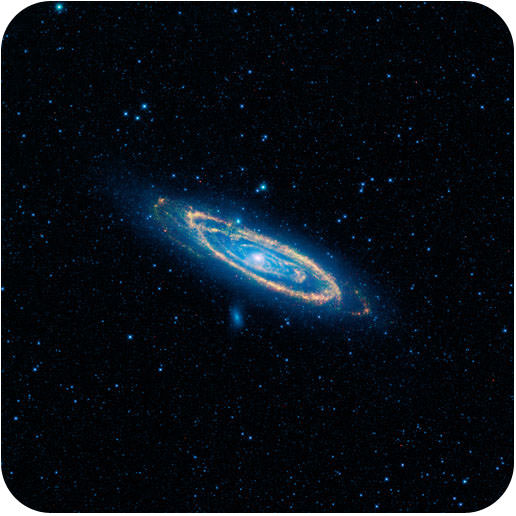 How do scientists learn about space?

Many scientists can touch the materials they study. Most can do experiments to test those materials. Biologists can collect cells, seeds, or sea urchins to study in the laboratory. Physicists can test the strength of metal or smash atoms into each other. Geologists can chip away at rocks and test their chemistry. What can astronomers use to study space? Light and other electromagnetic waves, of course. This is the Andromeda Galaxy as it appeared 2.5 million years ago. Why is the light so old?

Earth is just a tiny speck in the Universe. Our planet is surrounded by lots of space. Light travels across empty space. Light is the visible part of the electromagnetic spectrum. Astronomers use the light and other energy that comes to us to gather information about the Universe.

The Speed of Light

In space, light travels at about 300,000,000 meters per second (670,000,000 miles per hour). How fast is that? A beam of light could travel from New York to Los Angeles and back again nearly 40 times in just one second. Even at that amazing rate, objects in space are so far away that it takes a lot of time for their light to reach us. Even light from the nearest star, our sun, takes about eight minutes to reach Earth.

We need a really big unit to measure distances out in space, because distances between stars are so great. A light-year, 9.5 trillion kilometers (5.9 trillion miles), is the distance that light travels in one year. That’s a long way! Out in space, however, it’s actually a pretty short distance.

Proxima Centauri is the closest star to us after the Sun. This near neighbor is 4.22 light-years away. That means the light from Proxima Centauri takes 4.22 years to reach us. Our galaxy, the Milky Way Galaxy, is about 100,000 light-years across. So it takes light 100,000 years to travel from one side of the galaxy to the other! It turns out that even 100,000 light-years is a short distance. The most distant galaxies we have detected are more than 13 billion light-years away. That’s over a hundred-billion-trillion kilometers!

Looking Back in Time

When we look at stars and galaxies, we are seeing over great distances. More importantly, we are also seeing back in time. When we see a distant galaxy, we are actually seeing how the galaxy used to look. For example, the Whirlpool Galaxy is about 23 million light-years from Earth (Figure below). When you see an image of the galaxy what are you seeing? You are seeing the galaxy as it was 23 million years ago! 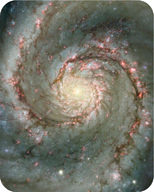 The Whirlpool Galaxy as it looked 23 million years ago.

Since scientists can look back in time, they can better understand the Universe's history.

An electromagnetic wave has oscillating electric and magnetic fields.

The wavelength is the horizontal distance between two of the same points on the wave, like wave crest to wave crest. A wave’s frequency measures the number of wavelengths that pass a given point every second. As wavelength increases, frequency decreases. This means that as wavelengths get shorter, more waves move past a particular spot in the same amount of time.

Visible light is the part of the electromagnetic spectrum (Figure below) that humans can see. Visible light includes all the colors of the rainbow. Each color is determined by its wavelength. Visible light ranges from violet wavelengths of 400 nanometers (nm) through red at 700 nm.

The electromagnetic spectrum from radio waves to gamma rays.

Many extremely interesting objects can’t be seen with the unaided eye. Astronomers use telescopes to see objects at wavelengths all across the electromagnetic spectrum. Some very hot stars emit light primarily at ultraviolet wavelengths. There are extremely hot objects that emit X-rays and even gamma rays. Some very cool stars shine mostly in the infrared light wavelengths. Radio waves come from the faintest, most distant objects.