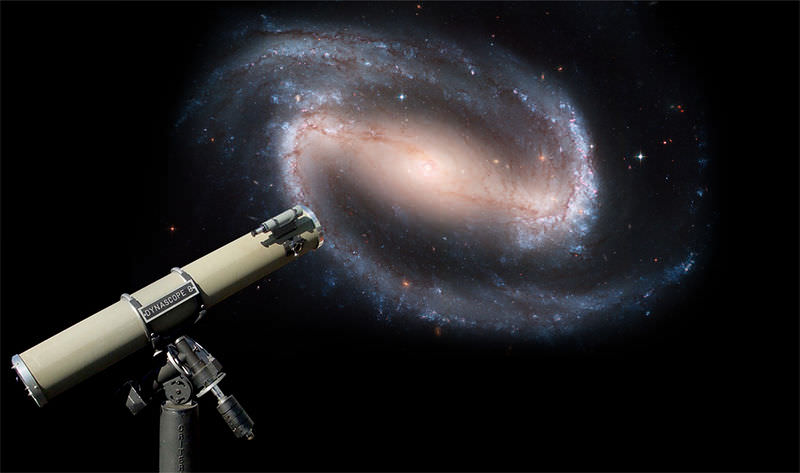 What would Galileo think of the things we can see through a telescope?

Galileo's telescopes could see about as much as a regular pair of binoculars today. Galileo could see four moons of Jupiter. This was four more than could be seen with the naked eye. But we now know that there are 69 moons. Galileo would be astonished to see all of Jupiter's moons. And imagine what he would think of the galaxies!

Humans have been making and using magnifying lenses for thousands of years. The term "telescope" was coined by the Italian scientist and mathematician Galileo Galilei (1564–1642). Galileo built the first telescope in 1608. His telescope used two lenses to make distant objects appear both nearer and larger. He subsequently made many improvements to telescope design.

Telescopes that use lenses to bend light are called refracting telescopes, or refractors (Figure below). The earliest telescopes were all refractors. Many amateur astronomers still use refractors today. Refractors are good for viewing details within our solar system. Craters on the surface of Earth’s Moon or the rings around Saturn are two such details.

Refracting telescopes can be very large.

Around 1670, Sir Isaac Newton built a different kind of telescope. Newton's telescope used curved mirrors instead of lenses to focus light. This type of telescope is called a reflecting telescope, or reflector.

It’s much easier to precisely make mirrors than to precisely make glass lenses. Mirrors are also much lighter than heavy glass lenses. For these two reasons, mirrors can be made larger than lenses. This is important because a reflecting telescope can be made much larger. Larger telescopes can collect more light. This means that they can study dimmer or more distant objects. The largest optical telescopes in the world today are reflectors. Telescopes can also be made to use both lenses and mirrors.

The largest single radio telescope in the world is at the Arecibo Observatory in Puerto Rico (Figure below). This telescope is located in a natural hole in the ground. This telescope would collapse under its own weight if it were not supported by the ground. There is a big disadvantage to this design. What do you think it is? The telescope can observe only the part of the sky that happens to be overhead at a given time. 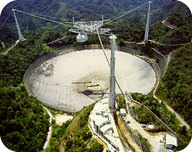 The radio telescope at the Arecibo Observatory in Puerto Rico.

A group of radio telescopes can be linked together with a computer. The telescopes observe the same object. The computer then combines the data from each telescope. This makes the group function like one single telescope. An example is pictured below (Figure below).

The Hubble Space Telescope (Figure below) is the best known space telescope. Hubble began operations in 1994. Since then, it has provided huge amounts of data. The telescope has helped astronomers answer many of the biggest questions in astronomy.

The Hubble Space Telescope has opened up the Universe to human observation.

The National Aeronautics and Space Administration (NASA) has placed three other major space telescopes in orbit. Each uses a different part of the electromagnetic spectrum. The James Webb Space Telescope will launch in 2020. The telescope will replace the aging Hubble. 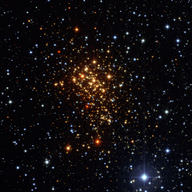 Stars in the star cluster appear as points of light. Observations like these must be made with a space telescope.