Why does some geological activity take place away from plate boundaries?

The geological activity in these photos is not occurring at plate boundaries. Is plate tectonics wrong? Of course not! This activity can also be explained. It's the result of hotspots. Two hotspot locations are Hawaii and Yellowstone.

Most geological activity takes place at plate boundaries. But some activity does not. Much of this intraplate activity is found at hot spots. Hotspots are plumes of hot material that rise through the mantle. Hotspot volcanoes erupt when the hot material melts to create magma.

Many hotspots appear to be fixed in the mantle. This means that they do not move relative to each other. Plates move above the hotspots, but the hotspots stay in the same spot. This feature is a very useful tool for scientists.

Hotspots in the Oceans 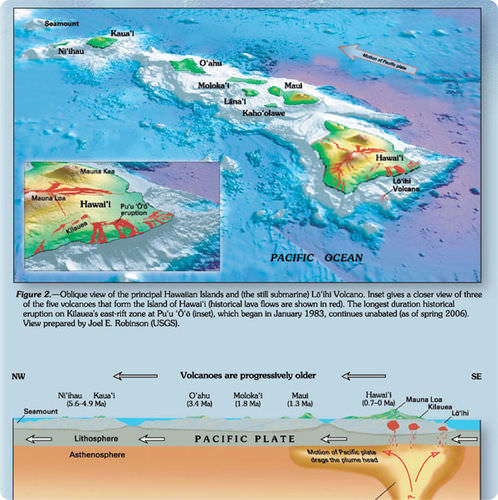 This view of the Hawaiian islands shows the youngest islands in the southeast and the oldest in the northwest. Kilauea volcano, which makes up the southeastern side of the Big Island of Hawaii, is located above the Hawaiian hotspot.

The Hawaii-Emperor chain of volcanoes formed over the Hawaiian Hotspot. The Hawaiian Islands formed most recently. Kilauea volcano is currently erupting. It is over the hotspot. The Emperor Seamounts are so old they no longer reach above sea level. The oldest existing of the Emperor Seamounts is about to subduct into the Aleutian trench off of Alaska. Older ones may already be in the trench. Geologists can get age dates from the volcanic rocks that erupt at these hotspots. So they use hotspot chains to tell the direction and the speed a plate is moving. 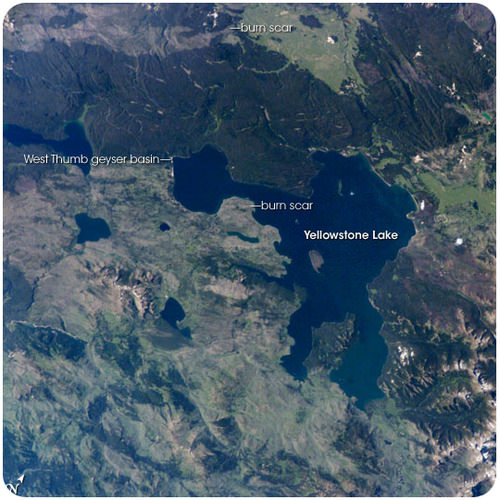 Yellowstone Lake lies at the center of a giant caldera. This hole in the ground was created by enormous eruptions at the Yellowstone hotspot. The hotspot lies beneath Yellowstone National Park.

Hotspots are also found under the continental crust. Since it is more difficult for magma to make it through the thick crust, they are much less common. One exception is the Yellowstone hotspot (Figure above). This hotspot is very active. In the past, the hotspot produced enormous volcanic eruptions. Now its activity is best seen in the region’s famous geysers.